Four fireballs of between magnitudes -5 to -9 or more were reported to the SPA Meteor Section from 2001 February 8-9 and 9-10. Two of these were seen from multiple sites, which we will particularly concentrate on examining here.

Twenty-five sightings of this fireball were received from observers between Perth and Dundee in Scotland south to Greater Manchester, Cheshire and North Wales, nine from south of the suggested surface track, the remainder from almost under it or to the north. With the full Moon present in the sky, making even the brighter stars less obvious than normal, only a minority of the observers were able to give useful sky positions for the visible trail, and not all of them spotted the entire event, which means the details given here are only estimates that fit best to the more accurate and reliable reports.

The fireball happened at 19h42m UT on 2001 February 8. The visible start height seems to have been about 80 km above the Kirkbride area in Cumbria (54 degrees 53′ N, 3 degrees 13′ W). The end height was about 60 km, over the hills between Durham and Peterlee in County Durham, near Ludworth (54 degrees 46′ N, 1 degree 27′ W). Reports from Newcastle and Sunderland commented on the object ending almost zenithally in the southern sky, for instance. The ground track was around 110 km long, trending west-north-west to east-south-east, as shown on the accompanying map. 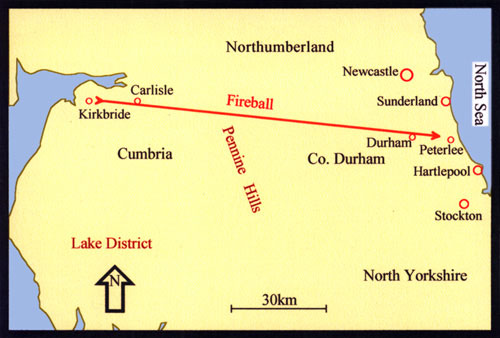 The atmospheric trajectory of the object, assuming the above track to be roughly correct, indicates the original meteoroid approached the Earth at a very shallow angle of descent, just 10 degrees or so from the horizontal, yielding an atmospheric path length of ~ 115 km. Flight-time estimates from seven observers suggest a mean value of around 6 seconds, equivalent to a mean atmospheric velocity of 19 km/sec. This implies the splashdown point for any surviving meteorites was perhaps some 200 km north of the Dutch mainland, in the southern North Sea.

No reports of sounds heard during or after the fireball’s flight were received, though several people commented on seeing fragments being shed for part of the trail, especially towards its end (probably 2 or 3 main pieces). No long-lasting persistent train was noted, but some sightings suggested a very short-lived train, sometimes called a wake, may have occurred, which lasted for under a second. The fireball was clearly colourful, with blue, green, yellow-red or orange mentioned by different people as being dominant. As for its brightness, it was probably at least magnitude -5 or -6, and possibly somewhat brighter than this to be spotted by people over such a wide geographical area. The colour problems, lack of persistent train reports and brightness estimates would all have been influenced by the bright moonlight of course.

A single report from Northumberland was received on this bright fireball, which seemed to have passed on a similar track to the 19h42m UT one. No other reports were secured however, and although a timing mistake is unlikely, it may be the explanation for this event.

Two vague reports were received from observers in Northumberland and Lancashire suggesting a bright or very bright fireball had passed over the northern UK, moving west to east at around this time. No further details could be established however, and it is possible both observers mistook the time for the object an hour later.

Eight reports of this perhaps magnitude -5 to -9 fireball were collected from observers between Harrogate in North Yorkshire north to the Dundee area in east-central Scotland. Most reports mentioned some fragmentation occurred during the object’s flight, with orange, red or green-blue popular colours in the statements to mention such. Unfortunately, the bright Moon again caused problems as on the previous evening, and even fewer accurate sky positions were obtained on this meteor, too few in fact to derive a useful atmospheric track. In all likelihood, the fireball was travelling roughly west to east some way offshore of the Dundee to Aberdeen stretch of coast, the whole flight perhaps between 40-200 km out over the northern North Sea. The fact that all the observers were west and south of the fireball’s flight made it more difficult to try to compute a usable trajectory.

My thanks go to all the observers for their individual reports, and also to Mike Dale and Rachel Mason of Royal Observatory Edinburgh, John Lambert of Newcastle AS, Jeff Lashley at the Mills Observatory, Dundee and Don Simson of Sunderland AS, for their assistance in collecting and forwarding many of the reports.