A certain law governs all astronomers’ attempts to observe events in the sky – you know the one I mean! It was certainly working against us Friday 27th of July when the much-publicised total eclipse was itself eclipsed by thick clouds. The ensuing thunderstorm brought us some much-needed rain but why, after weeks of clear skies, did it have to come on that particular night?

It seemed that all SPA members had suffered as a result of the weather, but this morning I received this image of the eclipse from David Davies. 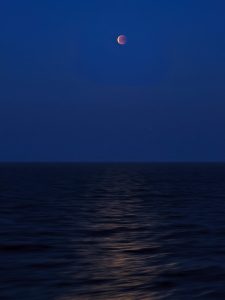 David was on a P&O cruise ship off the coast of Norway, about 60 degrees north and his picture was taken just after the end of totality. It is a composite of two images: one exposed to capture the Moon and  another, taken a few minutes later, to capture the reflection of moonlight on the sea.

David says that a TIFF version of the image is available at: