The final months of 2017 and the first months of 2018 brought few submissions to the Lunar Section. No doubt this was due to the weather we experienced during the winter; certainly the few clear nights never seemed to coincide with the phases of the Moon that I’d hoped to observe!

Mike Brown sent in an image of the 70 km crater Werner and the 80 km Aliacensis.  North of Werner is Blanchinus. This area is, of course, where the effect known as ‘The lunar X’ or ‘The Werner X’ can be seen for a brief period when these craters are on the terminator as the Moon approaches First Quarter, and the Sun’s rays illuminate rims and ridges between the craters La Caille, Blanchinus and Purbach. 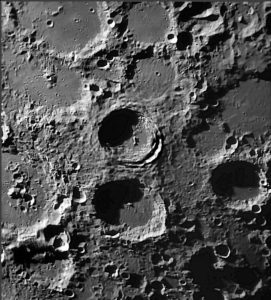 The first time I saw the Lunar X was on one of those serendipitous occasions that occasionally occur in astronomy. I was trying out some new gear and, throwing a live image of the Moon onto my laptop screen, I adjusted the focus and found I had the Lunar X smack in the middle of the screen. Following this I went online and found a list of dates and times when the effect would be visible again, intending to observe at these times. However, the dates invariably coincided with cloudy nights and, discouraged, I gave up and concentrated on other projects. Serendipity took a hand again on the evening of 22 February this year when I saw the sky was clear and turned my 200 mm SCT on the 7-day old Moon. The sketch I made is below. 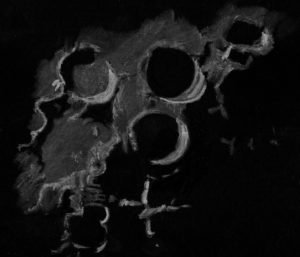 Dave Finnigan sent in three images, these being of the Aristarchus/Schroter’s Valley area, of the ray crater Kepler, and of Plato. Dave was particularly pleased with the detail of Plato’s rim that he captured. 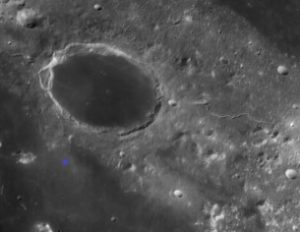 Plato’s rampart is quite low compared to many other craters, being on average 1 km in height, though there are peaks of 1.5, 1.8 and 2.1 km in the eastern wall. These cast dramatic shadows across the crater’s dark floor when the Sun is low in the Moon’s sky. Plato’s western wall is interrupted by a large, roughly triangular, block that has detached itself and slid inwards. Further north is a smaller landslide. 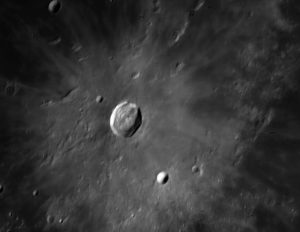 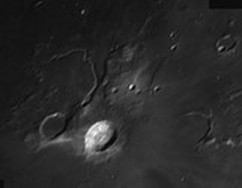