Beauty at the edge of Serenity

The lovely image featured below was taken by by long-time member Larry Todd (Dunedin, New Zealand) on 21 September. It shows the beautiful 95 km diameter crater Posidonius illuminated a few hours after the Sun had risen over it. Posidonius’ floor is a joy to view at high magnification; there’s a prominent near-central crater, a little arc of hills, along with floor ridges, faults and narrow valleys.

The terminator (the line of sunrise) lies off to the left in Mare Serenitatis (Sea of Serenity) but a number of features in the mare can be seen at this glancing illumination, most notably the northern branches of a low snaking system of wrinkle ridges known as Dorsa Smirnov. While the landscape northeast of Posidonius is relatively flat in the region of Lacus Somniorum (Lake of Dreams) the ground to the southeast is cratered; a number of faults and fault valleys cut through both terrains, the most prominent of which is Rima G. Bond, some 150 km long. You can view Posidonius on the evenings of 18/19 November and 18 December (sunrise terminator) and the mornings of 3 November and 3 December (sunset terminator). 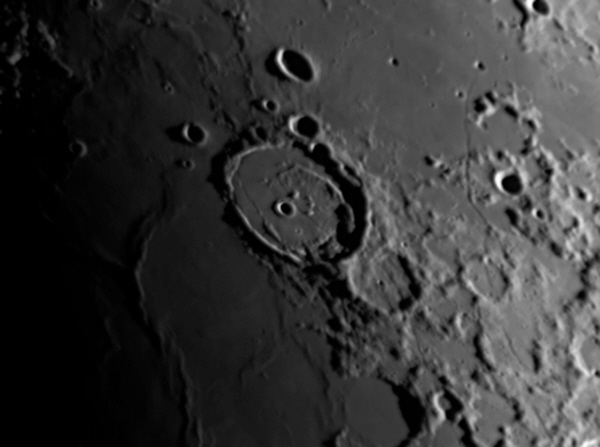