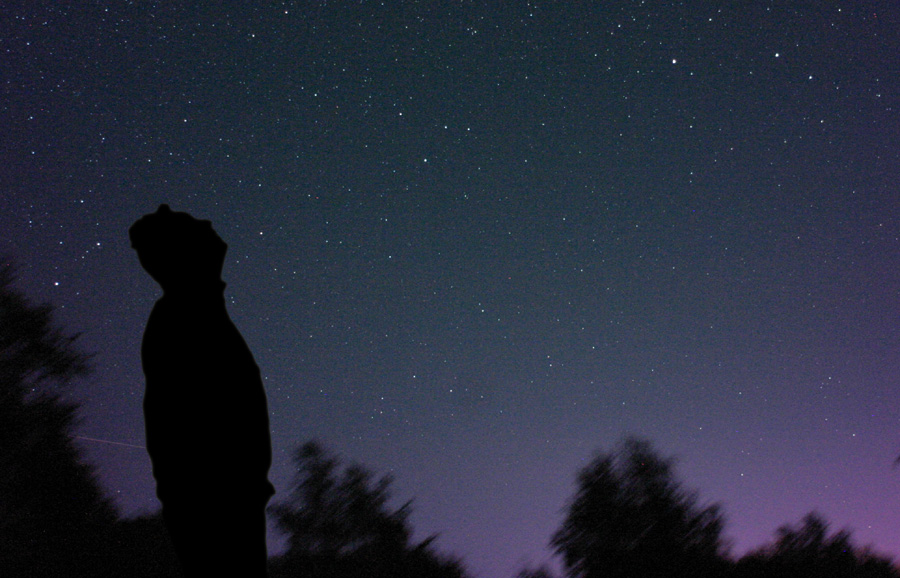 Learning the sky might seem tricky at first. There are so many stars, and unlike visiting a new town or city, the stars keep on moving around! But don’t give up! With a few tips and tricks, you’ll soon start to tell your Aries from your Aldebaran.

The first step is to look at a star map for the date and time when you are observing. These days, many people will use an app on their smart phone or tablet that shows them the correct stars just by holding it up to the sky. But if you don’t have one of these, try using the star chart on our Young Stargazers’ Sky Guide, or our Sky This Month map.

The app should know which direction you’re viewing, but with a map you need to work it out for yourself. Try first to work out which is south, which is the direction of the Sun at midday. Hold the app, or map, in front of you facing south and work out which constellation – star pattern – you’re viewing. Once you’ve picked out just one of the constellations on view, you can work your way through the others.

Even though apps might seem to be the perfect answer, it’s a good idea to treat them just as you would a map, and pick out each constellation one by one. That way, you’ll really learn the sky, rather than relying on the app.

As the Earth goes around the Sun, we see a slightly different part of the whole sky each night. If you observe at the same time each night, over a month or so you’ll notice that new stars have started to appear in the eastern part of the sky and old friends are starting to set in the west.  After a year, you’ll have seen the whole sky visible from your home site and everything is back where it started.

Everything, that is, apart from the planets. These move slowly against the starry background, so they aren’t shown on general star maps but only on those designed for the date in question. They stick close to a track in the sky known as the ecliptic, which is also followed by the Sun and Moon. So from the UK you’ll never see a planet directly overhead, nor in the north. You can often tell a planet from the stars just by looking at it. A planet doesn’t usually twinkle like a star, because it is a globe, rather than a point of light. Twinkling is caused by our turbulent atmosphere bending the light beam, so the beam of light from a star is more likely to be disturbed than that from a disc, even though it’s too small to be seen as such by eye.

After you’ve identified each planet (which may take some time, as they aren’t always visible), you’ll be able to see differences between them. Mercury, the closest planet to the Sun, always remains close to the Sun in the sky, so it’s only ever visible in the twilight after sunset or before sunrise. Venus, next out, does the same, but it moves much farther from the Sun and you can sometimes see it in a dark sky. It’s brilliant white, and it the brightest natural object in the sky after the Sun and Moon.

Mars comes next, but as it and the other planets are farther out from the Sun than Earth, it can be seen far from the Sun, and even in the midnight sky. It has a distinctly reddish colour – after all, it’s known as the Red Planet. Next comes Jupiter, which is white or a slightly creamy colour, and usually very bright. Saturn is slightly yellowish, and being far from the Sun only moves slowly through the sky. It moves only a short distance to the left (east) each succeeding year. It will be visible only in summer for some years to come.

Uranus and Neptune are too faint to be seen without a telescope.