This month, five section members sent in a total of 2 drawings and 22 images.

Graham Taylor used the Bradford Robotic Telescope on Mount Teide, Tenerife, (a Celestron C14 plus a FLI Microline camera and filters) to image NGC 6946, the “fireworks” galaxy on the Cepheus – Cygnus border.  This galaxy, also known as Caldwell 12 and Arp 29, is about 18 million light years from the Earth and is much smaller then our own galaxy at about 40,000 light years across.  It gets its epithet from the 9 supernovae seen within it since the start of the 20th century.

Mark Beveridge, observing from Aberdeen, sent in a total of 9 images;  the first two of M57, the “ring” planetary nebula in the constellation of Lyra and globular cluster M13, in Hercules.  For these images Mark used a 100mm f9 refractor and an SXVR-H814 mono camera plus colour filters. 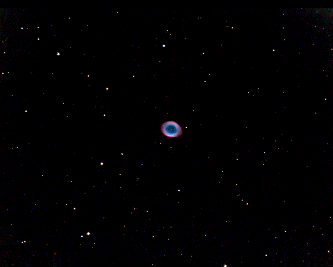 Mark’s next three images were taken using the same camera  as above but with a 140 Maksutov – Cassegrain telescope.  Here is another image of M57, and is globular cluster also in the constellation of Lyra.  M56 orbits our galaxy in a retrograde direction, and it has been suggested that it was captured when a dwarf galaxy merged with our own.

Next is Mark’s image of M76, the “little dumbbell” planetary nebula in the constellation of Perseus.

NGC 6888 is an emission nebula in the constellation of Cygnus, also known as the “crescent” nebula (and Caldwell 27).  The gas ejected from the Wolf – Rayet star WR 136 when it was in it’s red giant stage is being energised by the powerful stellar wind the star is now emitting.    This image was taken with the 100mm refractor and a SXVR – H9 colour camera.

Mark imaged the emission/reflection IC 5146, aka the “cocoon” nebula (and Caldwell 19), also in Cygnus.  It contains relatively newly formed  stars, of the order of 100,000 years old and is about 4000 light years from the Earth.  Part of the dark nebula Barnard 168 is at the bottom left of this image.

Here is the central bulge of M31 and its neighbour M110, galaxies in the constellation of Andromeda.

These two images were taken using the 100mm Skywatcher and the SXVR – H814 mono camsra plus RG and B filters.

Mark’s final image, taken with the 140mm Mak – Cas and SXVR – H9 colour camera, is NGC 7662, the “blue snowball” planetary nebula in the constellation of Andromeda.  One is the basic colour image, and the other images are reprocessed,  rescaled and cropped versions of the same to bring out structural detail.

Ian Papworth, observing with a Celestron NexStar 6SE f6.3 Schmidt Cassegrain telescope and a ZWO ASI 120MM camera, sent in 4 images:   M57, the “ring” planetary nebula in Lyra, M15 globular cluster in Pegasus, M82, (the “cigar” galaxy in Ursa Major) and NGC 2403, (aka Caldwell 7, a galaxy in Camelopardalis which along with M82 is a member of the M81 group of galaxies).  M82 is the closest starburst galaxy to us, being many times more luminous than our own galaxy.  NGC 2403 contains many HII regions of new star formation.

Ian also forwarded two sketches made by his son Toby, who was observing with a 6″ Newtonian reflector.  Below left is M31 galaxy in Andromeda, and right is M57 in Lyra.

Steve Norrie, observing from Fife,  sent in 8 images, all captured via a Skywatcher EDR 80 refractor and an astro modified Canon 600D DSLR camera.