This month, five deep sky observers (one of them new to the section) sent in a total of 42 images.  Four of these section members live in Scotland, which speaks volumes about the weather conditions prevailing in the rest of the UK lately.

Alan Clitherow, SPA planetary section director, had clear skies in early November at his observing location in Fife. Here are two versions of emission nebula NGC 7380, (also known as the Wizard nebula and number 142 in the Sharpless catalogue – Sh2-142), which is in the constellation of Cepheus.  It is a star forming region, spanning about 100 light years and is 7000 light years from the Earth.  The monochrome image was taken through a H alpha filter.  The colour image was made by combining data from H alpha and OIII filter exposures.

Alan also imaged a second emission nebula, Sh2-199 aka the Soul nebula, in Cassiopeia.  The nebula is another star forming region;  several small open clusters are embedded within it.  Cavities are being created by radiation and stellar winds from massive new stars, compressing gas and dust and triggering yet more star formation.  The monochrome version was taken using the combined data from SII, H alpha and OIII filters.

In colour is the same image but with the three filtered images mapped to red, green and blue (the “Hubble palette”).  Also is a H alpha true colour version.  Alan used a MN 190P f5 Maksutov Newtonian telescope, cooled, astro modified Canon 600 DSLR and narrow band filters as mentioned above.

Steve Cooke, submitting images to this section for the first time, uses a Skywatcher 200P Newtonian telescope and modified Canon 100D DSLR camera from his location in Devon.  Here are M11, the “wild duck” open cluster in the constellation of Scutum;  M57 the “ring” planetary nebula in Lyra;   M42 the famous region of nebulosity in Orion, and M33, the Pinwheel spiral galaxy in Triangulum.

Steve also imaged M27, the Dumbbell Planetary nebula in Vulpecula.  This quite bright (apparent magnitude 7.5) object is 8 x 7 arcminutes in angular size and can be seen with binoculars.  It is about 1300 light years from the Earth and is of the order of a light year across.  Estimates of its age vary from 10,000 to 14,600 years.  The star at the centre is thought to be over 1/20th  the diameter of the sun, with over half the sun’s mass, which would make it the largest known white dwarf.  Planetary nebulae are quite short lived in astronomical terms, just tens of thousands of years;  and for stars like our sun, the last stage of their long lives.

The next three contributors all took advantage of clear sky conditions over Scotland around the latter part of November to produce a bumper crop of deep sky images.

Mark Beveridge, observing from Aberdeen with an OMC 140mm f14.3 Maksutov Cassegrain telescope with a SXR-H814 camera plus red, green and blue filters, sent in images of globular clusters M15 in Pegasus and M71in Sagitta.

Mark imaged three more planetary nebula:  NGC 2392 (the Eskimo) in Gemini, (and the same image resized and cropped), then NGC 7048 in Cygnus and the Helix nebula, NGC 7293 in Aquarius.

Mark’s next four images are:  M56, a globular cluster in Lyra, NGC 1579, an emission nebula in Perseus also known as the Triffid of the North, IC 434 in Orion (the Horsehead nebula) and galaxy NGC 470 in Pisces.

Mark’s final four images are all of galaxies:   NGC 7606 in the constellation of Aquarius, NGC 864 in Cetus, NGC 925 in Triangulum and NGC 7814 in Pegasus.  This last edge on galaxy is similar in appearance to M104, and is sometimes called the Little Sombrero for that reason.  The starfield beyond it is noted for many faint, distant galaxies, reminiscent of the Hubble Deep Field image. 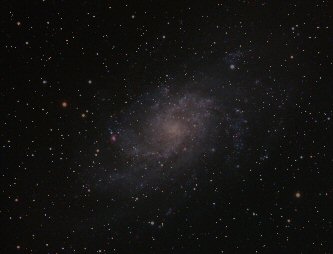 NGC 2244 is the Rosette emission nebula and associated open cluster in Monoceros.

Here is NGC 2244, with a different post capture enhancement.

This object is also known as Caldwell 50 and it contains several young hot O type stars, generating copious amounts of radiation and stellar wind.  In fact the open cluster is thought to be less than five million years old.  Its brightest stars are massive, of the order of 50 times the mass of the sun, and are about 400,000 times more luminous.

Dave Hancox sent in three images taken from Dalmellington in Scotland. M31 is the well known spiral galaxy in the constellation of Andromeda, then the Sword handle double cluster in Perseus;  NGC 869 and NGC 884.  Dave’s third image is of  NGC 7635, the Bubble emission nebula (together with open cluster M52), in Cassiopeia.  Dave used an Ascension 102mm refractor and a QHY8L camera.

The Sword Handle double cluster  is a naked eye object between Perseus and Andromeda and is a fine sight viewed with binoculars or a small telescope.  Both open clusters are around 7,500 light years from the Earth and around the same age, 13 million years old.  There are over 300 blue – white supergiant stars in each, and the double cluster is number 14 in the Caldwell catalogue of deep sky objects.