Three section members have sent in their observations this month, drawings from regular contributors Dale Holt and Michael Kinns and a DSLR image from new member James Dawson.

Dale’s drawing is of edge-on galaxy NGC 5529 in the constellation of Bootes.  This galaxy is about 6.2′ x 0.8′ in angular size, and is magnitude 12.2.  This galaxy is 250,000 light years across, twice the size of our own galaxy, and is 140 million light years distant.  The disk of this galaxy is slightly warped, suggestive of mergers with other smaller galaxies long ago.

NGC 4449 is an irregular galaxy about 12 million light years from Earth.  It  is similar in size to the Larger Magellanic Cloud, and has  an oblong appearance too. NGC 4449 is considered to be a starburst galaxy due to a high rate of star formation, whereas the LMC is not. 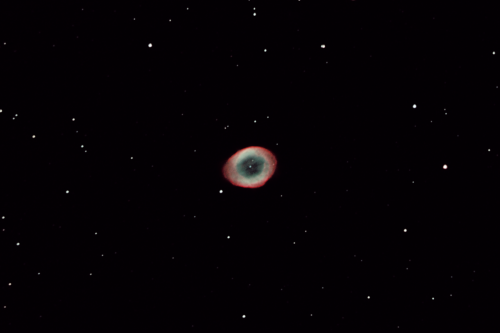 James Dawson sent in this image, his first to this section, of planetary nebula M57, commonly known as the Ring Nebula, in the constellation of Lyra.  James employed a Celestron C11 SCT and a DSLR, unguided for a series of 30 second exposures, to obtain this excellent result: