This month, six Deep Sky section members sent in their      observations;  15 drawings and 19 images in total.

David Davies made this wide angle image which highlights a number of deep sky objects in the constellation of Auriga.  Towards top centre is the open cluster M38, below it is a smaller open cluster NGC 1907.  At bottom centre is emission nebula IC 417, and bottom left emission nebula NGC 1931, both regions of new star formation.

Hubble’s variable nebula is a reflection nebula illuminated by the star R Monocerotis, which is itself not visible, being obscured by dust;  indeed, the observed variability may be due to dense dust clouds periodically blocking the light from the star. 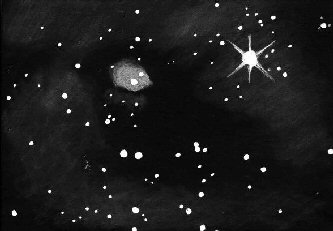 Dale’s final three drawings are  NGC 2918, a galaxy in the constellation of Leo,  M61, a barred spiral starburst galaxy in Virgo which has an active nucleus;  and NGC 3634 – 5, a galaxy pair in the constellation of Crater (which might be an interacting pair, or just a line of sight overlap – the jury is still out on this one).   Dale made these observations using a 505mm f3.5 Newtonian telescope and a Watec  120N+ cooled video camaera, sketching from the live screen image.

Alan Clitherow, SPA Planetary Section Director, sent in two images.  Emission nebula IC443, also known as the “jellyfish” nebula, is in the constellation of Gemini.  It is thought to be a supernova remnant, and is located near Eta Geminorum, and is about 50 arc minutes across, corresponding to about 70 light years if its estimated 5000 light year distance from the Earth is correct.  NGC 2244 is the Rosette emission nebula in the constellation of Monoceros.  Alan has combined exposures taken with SII, H alpha and OIII  filters mapped to R,G and B respectively to produce a colour image in the well known Hubble palette.  Alan used an ED 80 refractor and astro modified Canon 600D camera.

Mark Beveridge submitted 12 images of deep sky objects to the section.  M97 is the Owl planetary nebula in the constellation of Ursa Major;  NGC 672 and IC 1727 are a pair of interacting spiral galaxies in Triangulum, NGC 925 is a barred spiral galaxy also in Triangulum;  and NGC 3184 is a face on spiral galaxy in Ursa Major, noted for a small nucleus and long well defined spiral arms.

Mark’s next four images are four galaxies in Ursa Major:  NGC 3631 (also known as Arp 27, a peculiar galaxy categorised as “a spiral galaxy with one heavy arm”),  NGC 2685 the “helix” galaxy (a rare lenticular, polar ring, Seyfert galaxy),  NGC 3079, a barred spiral galaxy and NGC 4051, a Seyfert spiral galaxy with a nucleus containing a supermassive black hole that has been known to emit X rays.

Mark’s final four images are NGC 4244, an edge-on spiral galaxy in the constellation of Canes Venatici (aka Caldwell 26),  NGC 4490 and NGC 4485 the “cocoon” galaxy pair, also in Canes Venatici (aka Arp 269), NGC 2903, a barred spiral galaxy in Leo;  and NGC 2419, a globular cluster in Lynx (aka Caldwell 25), called the “intergalactic tramp”by Harlow Shapley because, at 275,000 light years from the Earth, he believed it was leaving the Milky Way galaxy for deep space (not so).  Mark used a 140mm f14.3 Maksutov Cassegrain telescope and a SXR-H814 mono camera plus R,G and B filters.

Steve Norrie sent in four images.  First is a wide field view of the M42 emission nebula region in the constellation of Orion, also including M43 and NGC 1973/5/7, the “running man” reflection nebula at the top of the image.

Here is M51, the “whirlpool” Seyfert galaxy in Canes Venatici, and its smaller companion NGC 5195.

Steve’s next image features M81 and M82;  galaxies in the constellation of Ursa Major.  M81 aka Bode’s galaxy, is the brighter of the pair.  M82, aka the “cigar” galaxy, is a starburst galaxy which hosted a type 1a supernove in 2014.

Next is NGC 2355 then M35, these two observed at 100x;  all three open clusters are in the constellation of Gemini.   NGC 2135 is about 2 billion years old and 9,000 light years from the Earth, and was once thought to be a globular cluster. NGC 2355 is about half the age and half the distance of NGC 2135.  M35 is closer still at about 2,800 light years, and considerably younger at around 100 million years.  It is a naked eye object when conditions are favourable.