Seven section members sent in a total of 33 observations this month;  8 drawings

Steve Norrie of Fife contributed three images: the first is M1,  the Crab nebula, a supernova remnant in the constellation of Taurus. Chinese astronomers witnessed this supernova in 1054 AD.

The second image is spiral galaxy NGC 2403 is in the constellation of Camelopardalis, and  an image showing three kinds of diffuse nebula.  Barnard 33 is a dark nebula known as the Horsehead nebula. NGC 2024 is the reddish nebula to the left of the bright star Alnitak; this emission nebula is known as the Flame nebula.  The blue nebulosity to the left of the Horsehead is NGC 2023, an example of a reflection nebula. Steve used an ED80 refractor and a modified Canon 600D camera for these images

Michael Kinns of Eastry sent in four drawings.  Open cluster NGC 2244 is in the constellation of Monoceros;  one drawing was made using 50 x 7 binoculars, the other with Michael’s 200mm f6 Newtonian reflecting telescope at a magnification of 67 x.

M67 is an open cluster in the constellation of Cancer.  NGC 2775 is a spiral galaxy also in the same constellation.  NGC 2775  is also known as Caldwell 48.  These too were observed using the 200mm telescope at a magnification of 75 x.

Alan Clitherow, Planetary Section Director, imaged NGC 2264 which is in the constellation of Monoceros, and comprises the Cone emission nebula and the Christmas Tree open cluster.

Alan used a ED80 refractor, with a 0.8x focal reducer attached. The camera was an OSC QHY10.

Mark Beveridge, observing from Aberdeen, sent in 10 images this month.  Mark used a 140mm f14,3 OMC Maksutov telescope plus a SXR-H814 mono camera plus RGB filters for the first 4 images here.  NGC 3359, and  NGC 3556, better known as M108, are both in the constellation of Ursa Major. The latter image shows many faint, distant galaxies in the background, plus a very distant quasar. 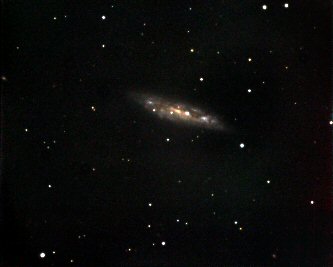 NGC 2841 is noted for an abundance of young blue stars, but few HII regions.  Its spiral arms are discontinuous; the galaxy is of a type called a floculent spiral. 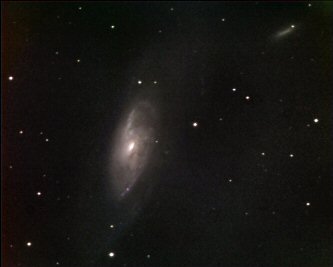 NGC 4258Mark’s remaining images were made using a 100mm f9 Orion Skywatcher refractor, plus the camera and filters described above.   M101 is a face on spiral galaxy in the constellation of Ursa Major, called the Pinwheel galaxy.  It is about 170,000 light years across, considerably more than our own Milky Way galaxy.  IC405 is an emission/reflection nebula in the constellation of Auriga, known as the Flaming Star nebula.  The bright bluish star is AE Aurigae, an irregular variable.  It is UV radiation from this star which is ionising hydrogen gas, making it visible in the far red.

The next pair of images are both emission nebulae in the constellation of Cassiopeia. IC 1848 is also known as the Soul nebula and NGC 896 is known as the Heart nebula.

Mark’s final pair of images are NGC 1499, the California nebula, an emission nebula in the constellation of Perseus.  This nebula shines at the H beta wavelength of 486 nm due to radiation from a very energetic star, xi Persei (Menkab).  NGC 3953 is a barred spiral galaxy in the constellation of Ursa Major.  This magnitude 10.8 galaxy is a member of the M109 group of galaxies;  two supernovae have been seen within it since the year 2000.

Graham Taylor used the Bradford Remote Telescope situated on Teneriffe for the 3 images below.  M33 is the Pinwheel spiral galaxy in the constellation of Triangulum.  NGC 4631, The Whale galaxy, also known as Caldwell 32, in the constellation of Canes Venatici.  This edge-on galaxy contains a central region of intense star formation; so many of the most massive stars have already ended their lives as supernovae that huge quantities of gas are being expelled out of the plane of the galaxy, visible in X-ray photographs.

Graham’s third image is supernova remnant NGC 692, The Veil nebula, in the constellation of Cygnus.  It is thought that the source supernova exploded 5000 – 8000 years ago.

Dale Holt sent in four drawings.  M3 is a globular cluster in the constellation of Canes Venatici.  It contains about 500,000 stars, 274 of which have been identified as variables, more than can be said for any other globular cluster. Dale used a 153mm f9 refractor for this observation, plus a Watec 120N+ video camera.

Next is M94, a spiral galaxy also in Canes Venatici.  This galaxy is of interest because it has an inner and an outer ring structure, the former being the site of considerable new star formation making this galaxy a starburst galaxy.

The third sketch shows two galaxies in the constellation of Leo, the eliptical M105 and the barred lenticular NGC 3384.  M105 is known to contain a supermassive black hole.

The fourth sketch is of NGC 4449, also known as Caldwell 21, an irregular galaxy in the constellation of Canes Venatici.  This is another example of a starburst galaxy;  there are several massive young star clusters here.

The last three observations were made using a 505mm f3.5 Newtonian telescope plus the video camera as above.

Ian Papworth sent in eight images, using a Celestron Nextar 6SE f6.3 telescope, and a ZWO ASI 120mm video camera.  Since this telescope is on an alt -Azimuth mount, exposures need to be relatively short, to avoid field rotation.  Ian has used a filter wheel to produce the colour images; considering the very short sub frames and the nature of the telescope mount these have turned out very well.

Ian’s first image is M42, the diffuse nebula in the constellation of Orion: the second is Ian’s colour version of the Trapezium in M42.