In recent months northern hemisphere comet observers have been very frustrated by comets that looked very promising when their numbers were initially crunched, but then failed to behave as hoped. Comets ATLAS and then SWAN both looked like they had the potential to be naked eye comets in the northern sky, but both essentially fell apart and fizzled out, becoming little more than misty splodges that were so faint they could only be seen through telescopes or on long exposure photos. But even as ATLAS and SWAN disintegrated attention was being turned towards another comet, and when its numbers were crunched it looked like it might, MIGHT, be 3rd time lucky…

Comet C/2020 F3 (NEOWISE), or Comet NEOWISE as I’ll call it for the rest of this post, was discovered on March 27th 2020 by the NEOWISE space telescope. It will be at perihelion – its closest point to the Sun – on July 3, 2020, and its closest approach to Earth will occur almost three weeks later, on the 23rd of July 2020, when it will be passing us at a distance of just 0.69 AU (103 million km). No doubt the usual suspects in the media will hype it up and write clickbait nonsense about it “streaking across the sky” or “skimming past Earth”, but ignore it. It’s just a comet doing what comets do, and will be no threat to us.

Of course, the big question is: how bright will it get? There’s an easy answer to that: we don’t know. The latest predictions suggest it might possibly reach first or even zero magnitude, but it would be very foolish to expect that. ATLAS and SWAN were both predicted to be a lot brighter than they were, so the best we can do is just wait and see what happens. Having said that, it does look a little more promising for NEOWISE. It’s an old comet, obviously quite sturdy, and seems large too, and as it has neared the Sun – becoming visible on the images taken by the SOHO observary’s LASCO instrument, see below – it has shown no signs of disruption or anxiety, so that’s a good sign. But let’s just wait and see what happens. 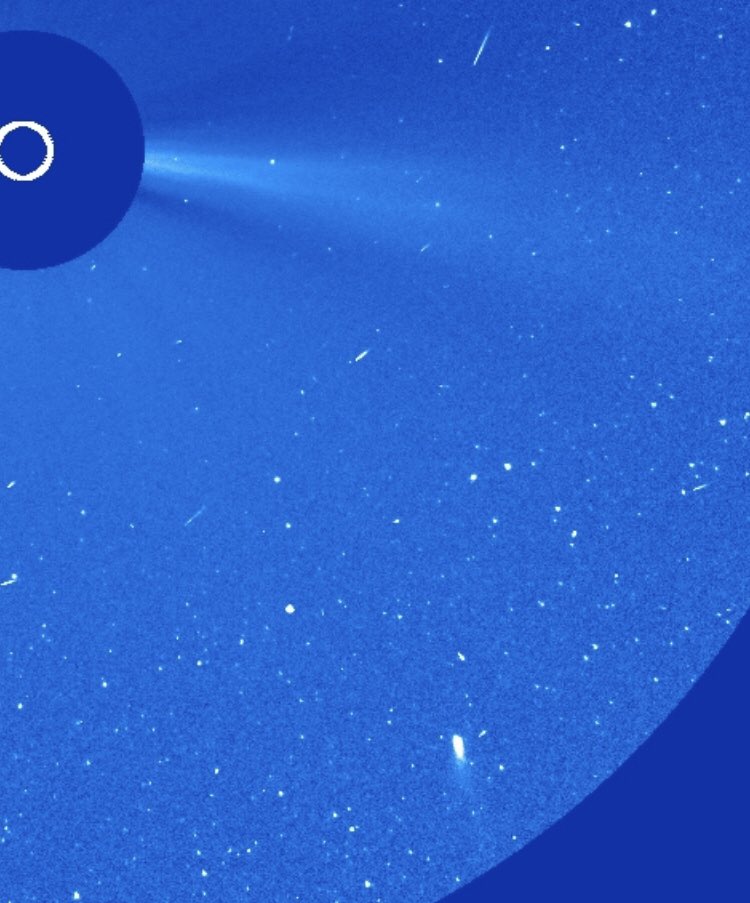 The first sightings of Comet NEOWISE from mid-northern latitudes will probably be made on or soon after its July 3rd perihelion. A morning object then, shining some distance beneath the bright star Capella, it will still be quite close to the Sun in the sky, but as the days pass it will gain height and hopefully increase in brightness too, and will be visible both before sunrise and after sunset.

Unfortunately – yes, you knew that word was coming, didn’t you? – Comet NEOWISE is not going to get high in the northern sky. It is going to be another frustrating “horizon hugger”, tracking from beneath Capella to the left, towards and then beneath the stars of the Big Dipper…

And as it’s summer, and the night sky never gets truly dark at mid-northern latitudes at this time of year, it will be in a bright sky too. So even if it does reach zero magnitude it will still be a challenging target for visual observers and photographers, fighting a double whammy of low altitude and twilight.

But let’s be positive! Comet NEOWISE is behaving itself, and if it doesn’t decide to copy ATLAS and SWAN and disintegrate after whipping around the Sun we might have a pretty comet to observe through July. It might grow a nice tail, it might not. It might be visible to the naked eye, it might not. It should be easy to observe through binoculars, and small telescopes, consider anything else a bonus! 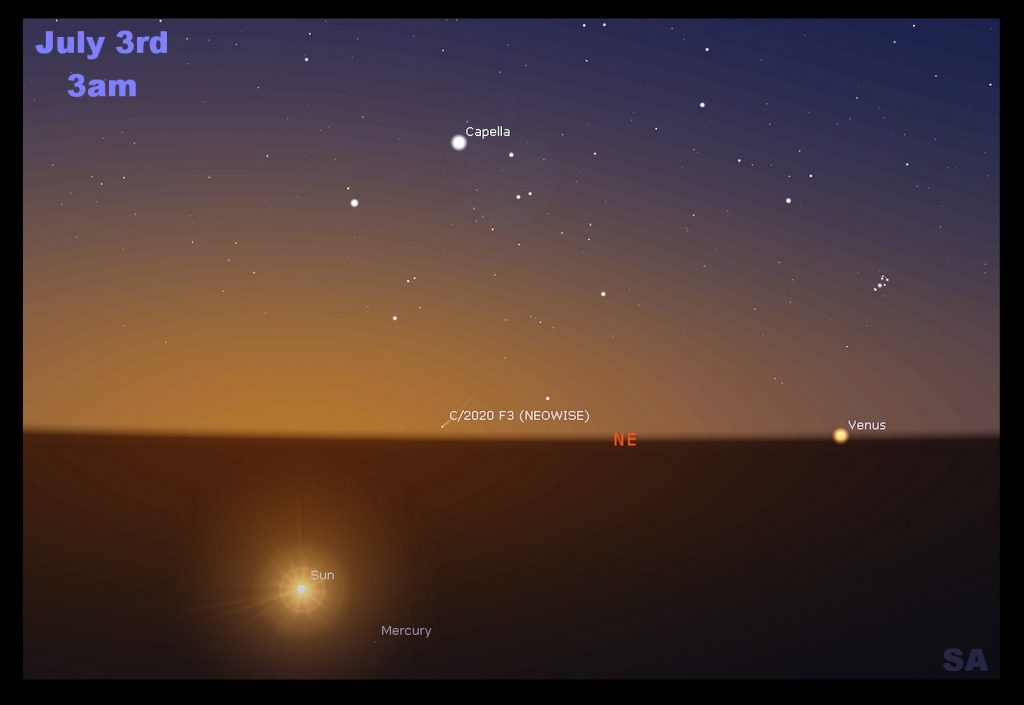 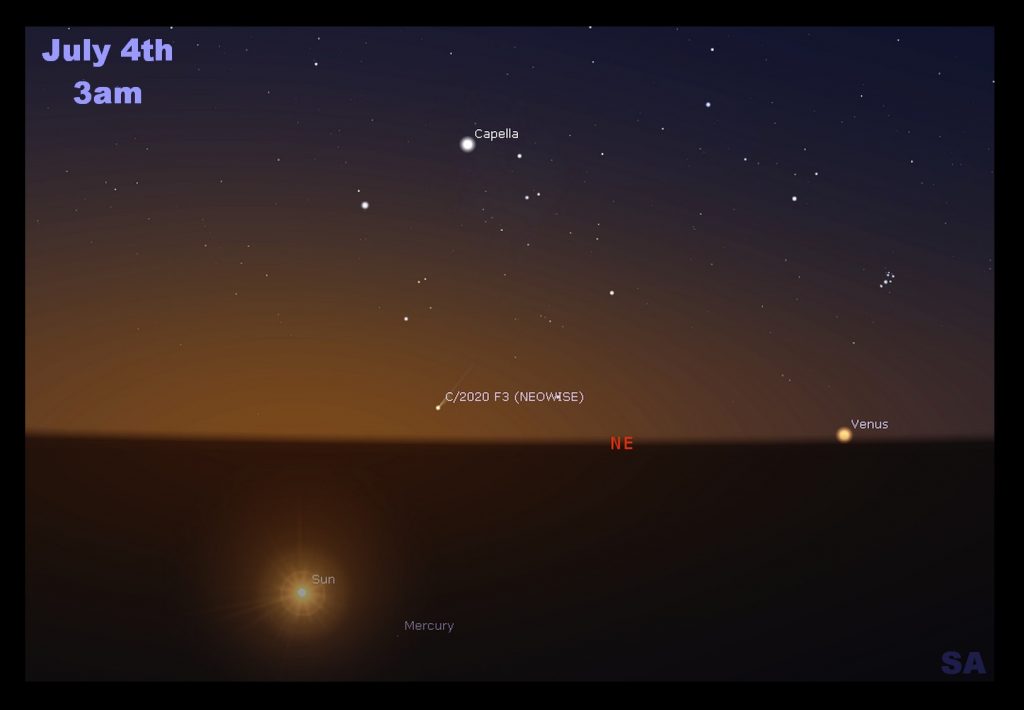 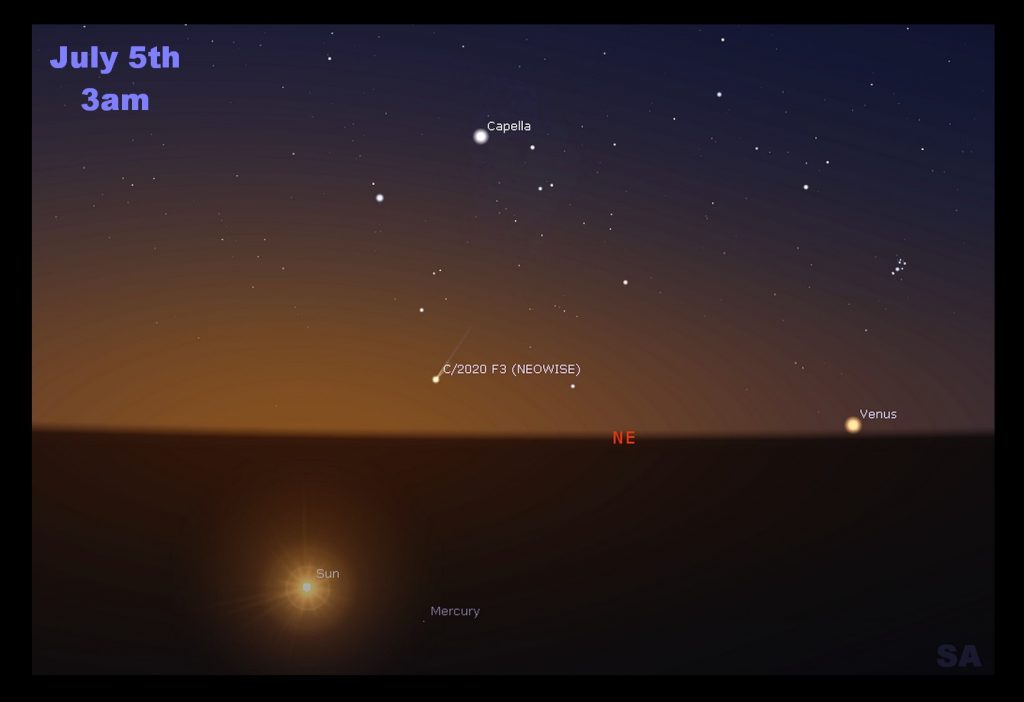 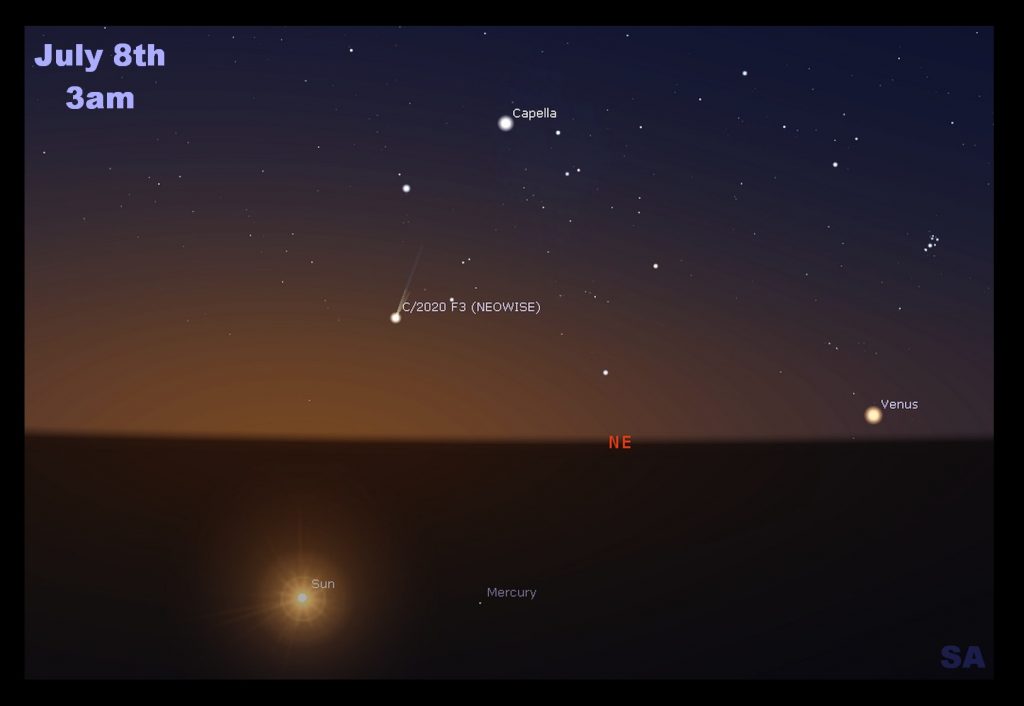 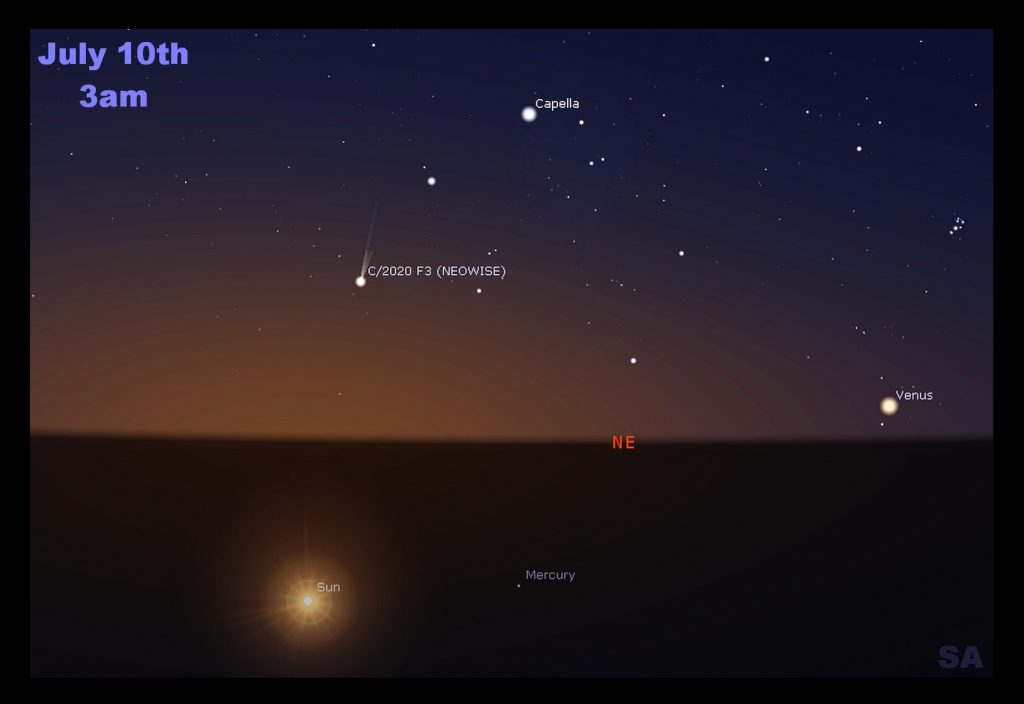 Please note: these charts were made for my observing location, in Kendal, Cumbria, up at 54deg N latitude. If you live north or south that it will affect how high the comet is in your sky. But I think that for this comet it’s going to be quite simple to find – first look for it below Capella, then as the days pass look for it beneath the stars of the Big Dipper.

I think the keys to finding it will be the bright star Capella, and the bright planet Venus – it will always be lower than Capella in your sky, and if it isn’t obvious to the naked eye you can use Venus as a guide to where it should be by looking to the left of that planet. Fingers crossed you won’t need any help finding it tho, and in a week or so’s time you’ll be able to go out before sunrise and/or after sunset and finally, after all the recent near-misses, see a comet in the sky without needing a telescope the size of Hubble or a £1000 camera on a fancy mount.

Once NEOWISE has been spotted, and we have a better idea of what it’s going to do, I’ll post again with details of how to observe it and how to photyograph it too. In the meantime, you can prepare for its arrival in the northern sky by looking at these charts. It might be a good idea to get out before sunrise on the next clear morning so you can familiarise yourself with this part of the sky and its visibility from where you are – you don’t want to wait until NEOWISE is in the sky to find out that a hill, some trees or tall buildings will block the comet from your view. You want your northern horizon to be as low, as flat and as clear of light pollution as possible. 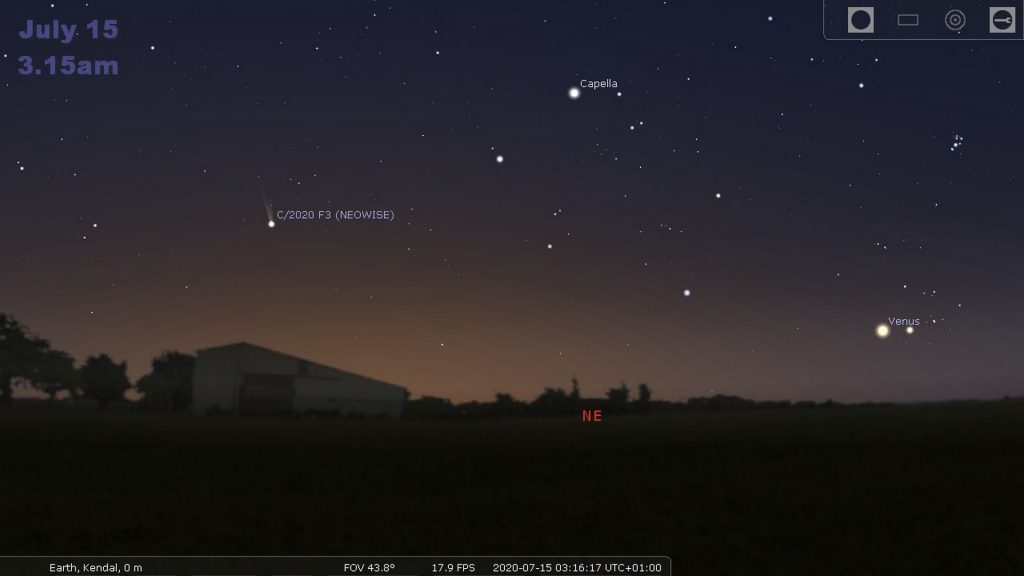 So, here we go again. Best case scenario? NEOWISE grows a nice tail and is visible to the naked eye in mid-July. More likely, the bright sky and low altitude will conspire to make it visible only with binoculars or a small telescope. We’ll just have to wait and see.