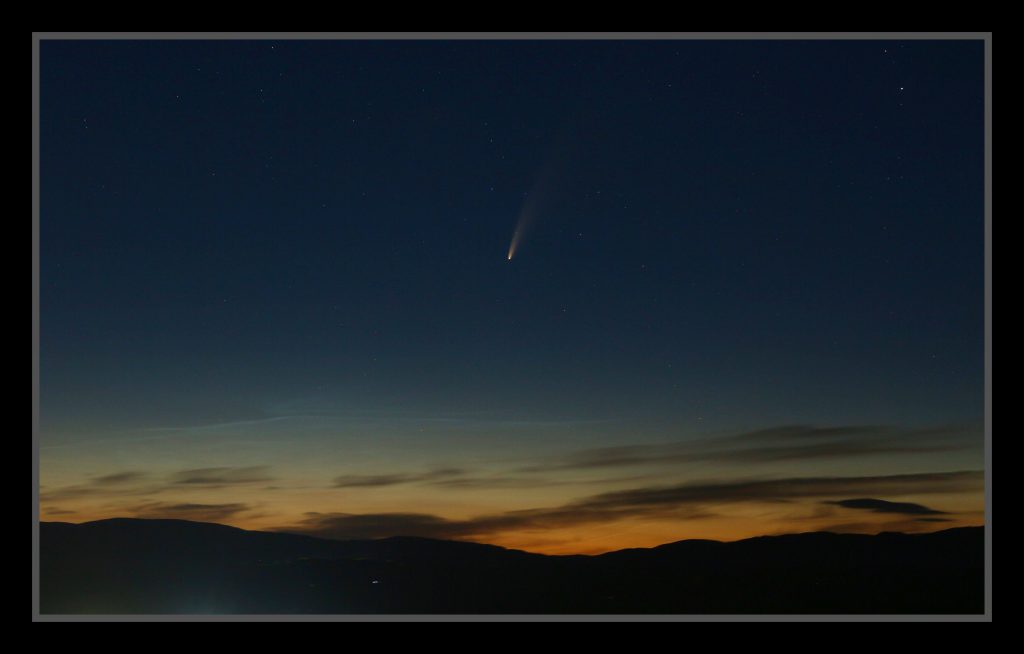 It’s been a long time coming, but northern hemisphere comet observers finally have a naked eye comet to see and photograph!

Northerners have had a bit of a frustrating time recently. Just a month or so ago, comets SWAN and ATLAS both looked like they might become naked eye comets but they both failed to live up to hopes and expectations and faded away. So when its orbital elements were computed, its track around the Sun and its path across the sky were calculated, it looked like Comet NEOWISE F3 had the potential to be a naked eye comet. But having been burned by those two comets many thought “Yeah, right, I’ll believe it when I see it…”

Good news – Comet NEOWISE isn’t just living up to expectations, its exceeding them. Although it’s not in the same league as 1997’s epic Comet Hale-Bopp, NEOWISE F3 is a striking sight in the northern sky. In fact it’s so obvious that millions of people around the world – not just astronomers – are falling in love with it. 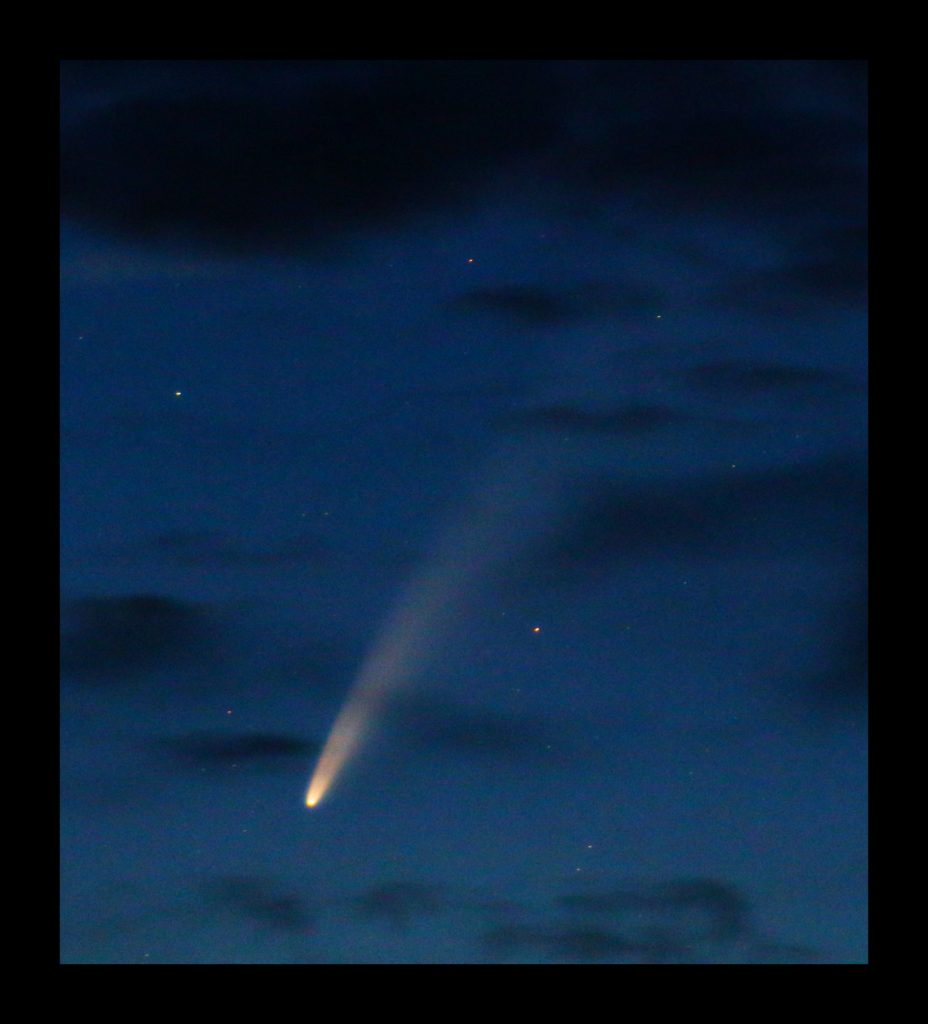 F3 is a classic comet – a star with a misty tail, looking like one of the illustrations from old astronomy books. It’s actually very easy to find. Once the sky gets dark enough for the first stars to come out, and for Jupiter and Saturn to appear low in the south-east, F3 will become visible low in the north, to Capella’s left. It has grown a tail approximately ten degrees in length, clearly visible to the naked eye, and long exposure photographs are showing it stretches for much longer than that. Through binoculars and small telescopes the comet is a wonderful sight, its tail shining with a subtle golden hue and subtle details around its nucleus. It’s the best looking comet for years – though, to be fair, the competition hasn’t been much..! 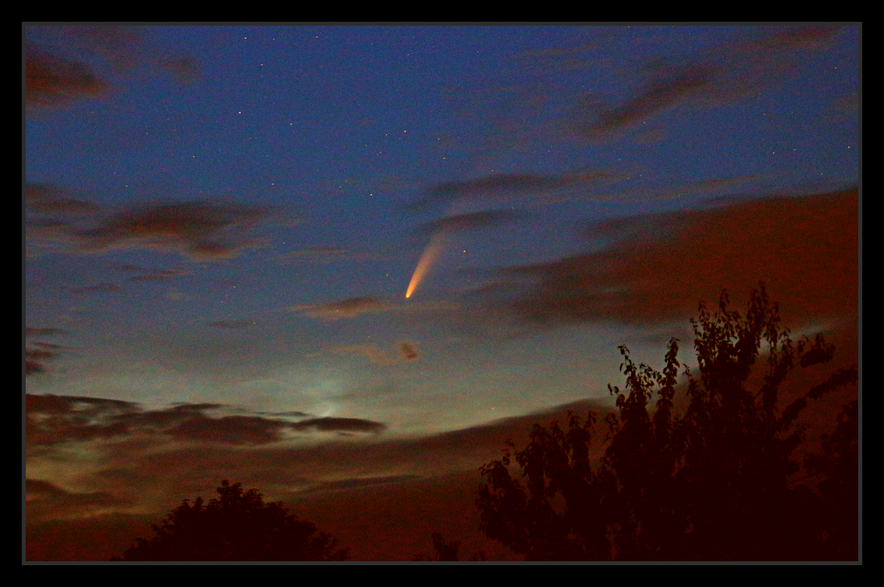 Where is NEOWISE now? Well, after initially being just a morning object, for comet observers in mid-northern latitudes F3 is now visible low in the northern sky all through the night, from around 11pm to 3.30am. It is now starting to climb higher in the sky, on a track that will take it up towards the familiar stars of the Big Dipper. Unfortunately it will never get very high in the sky, and will remain a “horizon hugger” as it begins to fade over the next couple of weeks. And it will fade, all comets do, but when it does it should still be a lovely sight in binoculars. 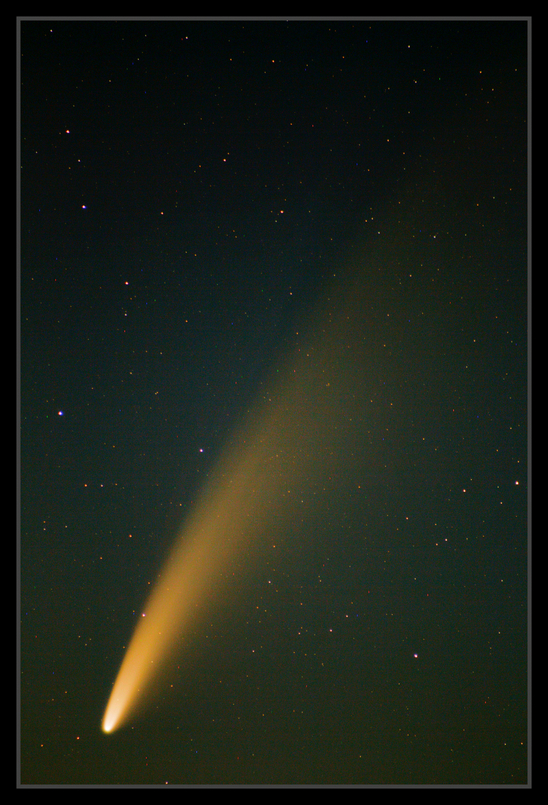 NEOWISE is a world-wide hit with astronomers and non-astronomers alike. Facebook, Twitter and other social media platforms are swamped with gorgeous photos of the comet taken from many different countries. Here in the UK, observers have finally managed to see and photograph the comet after a seemingly endless period of cloud and rain. Last weekend many were treated to a rare sight – a naked eye comet shining behind, and through, a spectacular display of electric blue noctilucent clouds.

What are the comet’s prospects? As I write this its brightness seems to be holding up nicely, and its tail is continuing to grow, so it seems healthy. All being well F3 should remain visible to the naked eye until the end of the month, when it will be beneath the Big Dipper, but it may begin to fade soon. But even when it does it won’t just wink out and vanish; it will remain a lovely sight in binoculars and telescopes for a good while to come. 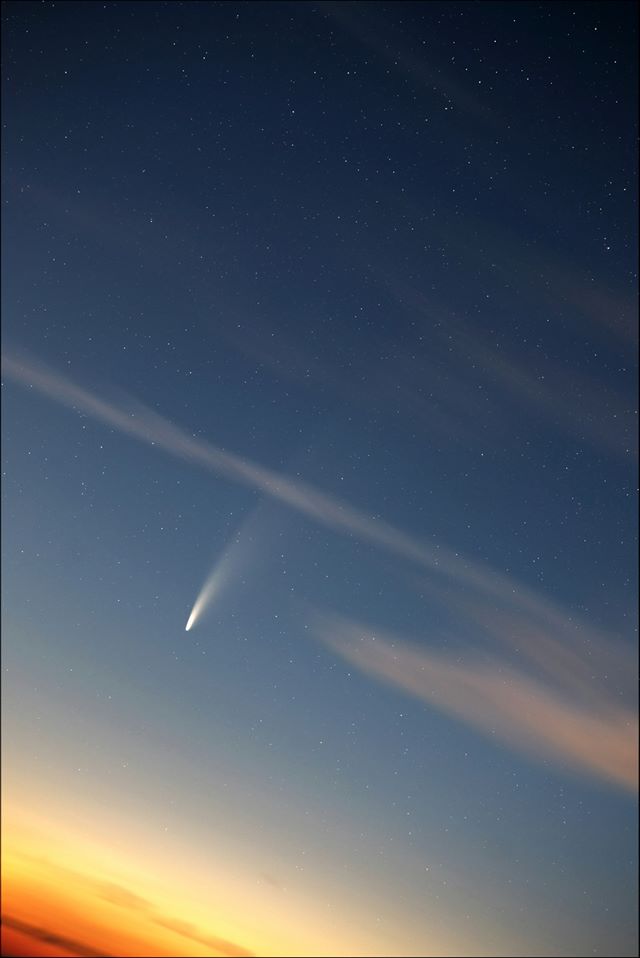 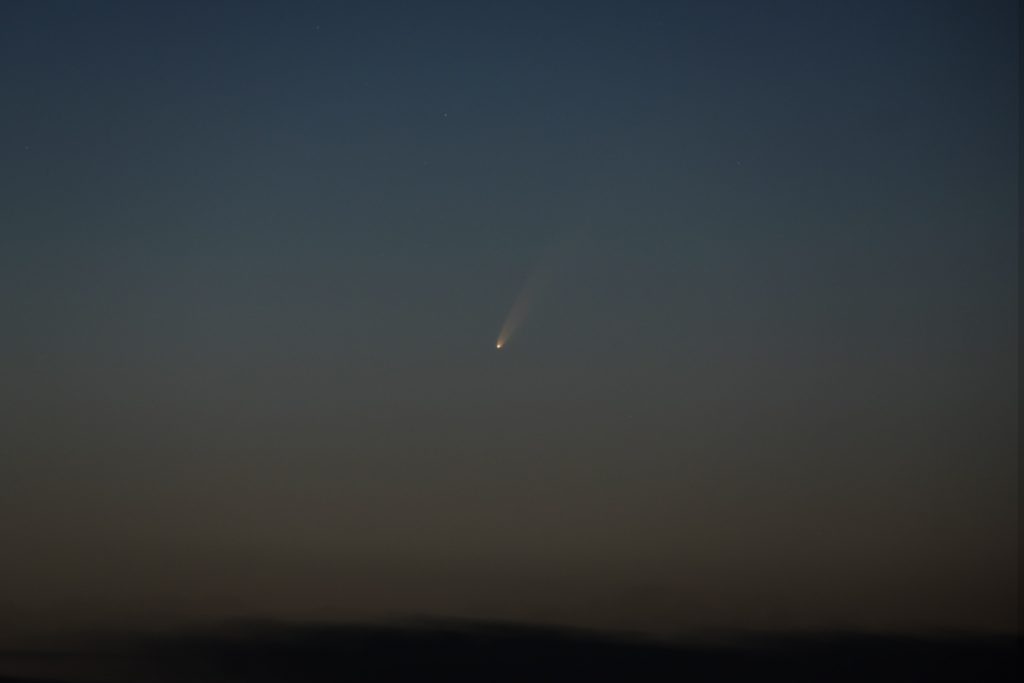 If you haven’t seen Comet NEOWISE yet you should give it a go on the next clear night. Just go out around 11pm, look roughly towards the north, and eventually you’ll see a star with a fuzzy tail behind it, pointing up from the northern horizon. By 1am, now shining above the north-eastern horizon, the comet’s tail will resemble a short vapour trail. By 3.30am the morning sky will become so bright with the approach of dawn that it will hide the comet.

(all other images credit: S Atkinson)