After delighting observers “down south” for the past month or so Comet SWAN F8 is now, technically, visible to observers in the northern hemisphere. Although it gave us a bit of a scare last week when its magnitude started to drop sharply – and the usual doom-mongers raced to predict it was dying and breaking up, just like Comet ATLAS had done a couple of weeks earlier – recent observations suggest it is hanging in there and even starting to develop a dust tail to go along with its long, thin ion tail.

For northern observers at UK latitudes at least, Comet SWAN is still not easily visible. It is still very low before sunrise, in a bright sky, and its magnitude of 5.5 (approx) means it’s nowhere near being “prominent” as some reporters in the media are telling their readers.

The problem is, many people see the comet is below 6th magnitude and assume that means it is a naked eye object, because the unaided eye can see stars of 6th magnitude and brighter. But comets are extended objects, misty and fuzzy, and look more like deep sky objects such as galaxies and nebulae than stars. So photographing (or viewing) a comet is like photographing (or viewing) a long, thin galaxy, not a point of light.

To illustrate that, these two images, taken this morning, show the Andromeda galaxy, M31, and the region of sky where Comet SWAN was, according to the phone app I use. They are of (very!) roughly the same field of view and exposure and were taken with the same lens. There’s no sign of the comet, which is not surprising when you see how faint M31 looks – and M31 is 3rd magnitude, not 5.5 like the comet. 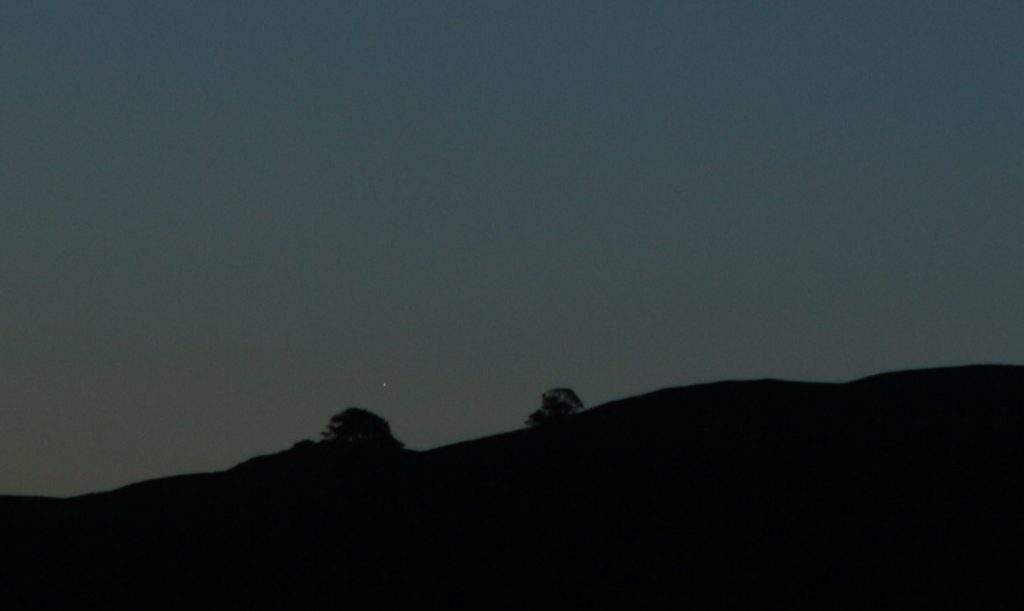 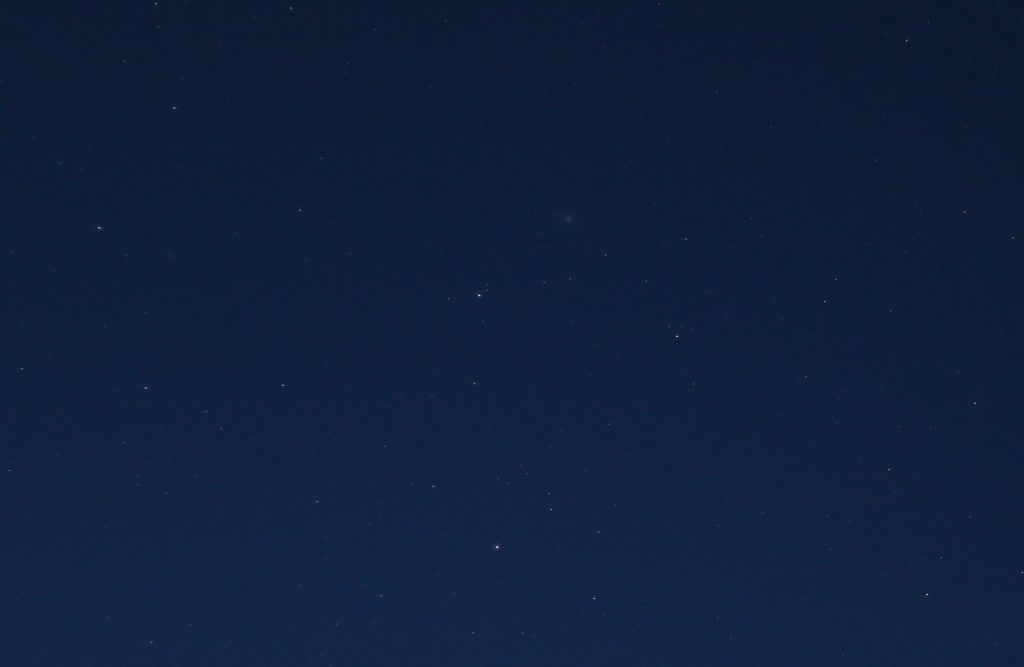 So, if you’re at mid-latitudes you’re going to have to wait a while longer to see Comet SWAN, perhaps another week or so. Then it will be higher in the sky, hopefully brighter, and with a stronger tail too. By the end of May it will be visible both after sunset and before sunrise, and that’s when most people will see and photograph it. My money is on or around May 19th for my first sighting from where I live, which is in the Lake District at around 54 degrees north. Here’s where I’ll be looking… 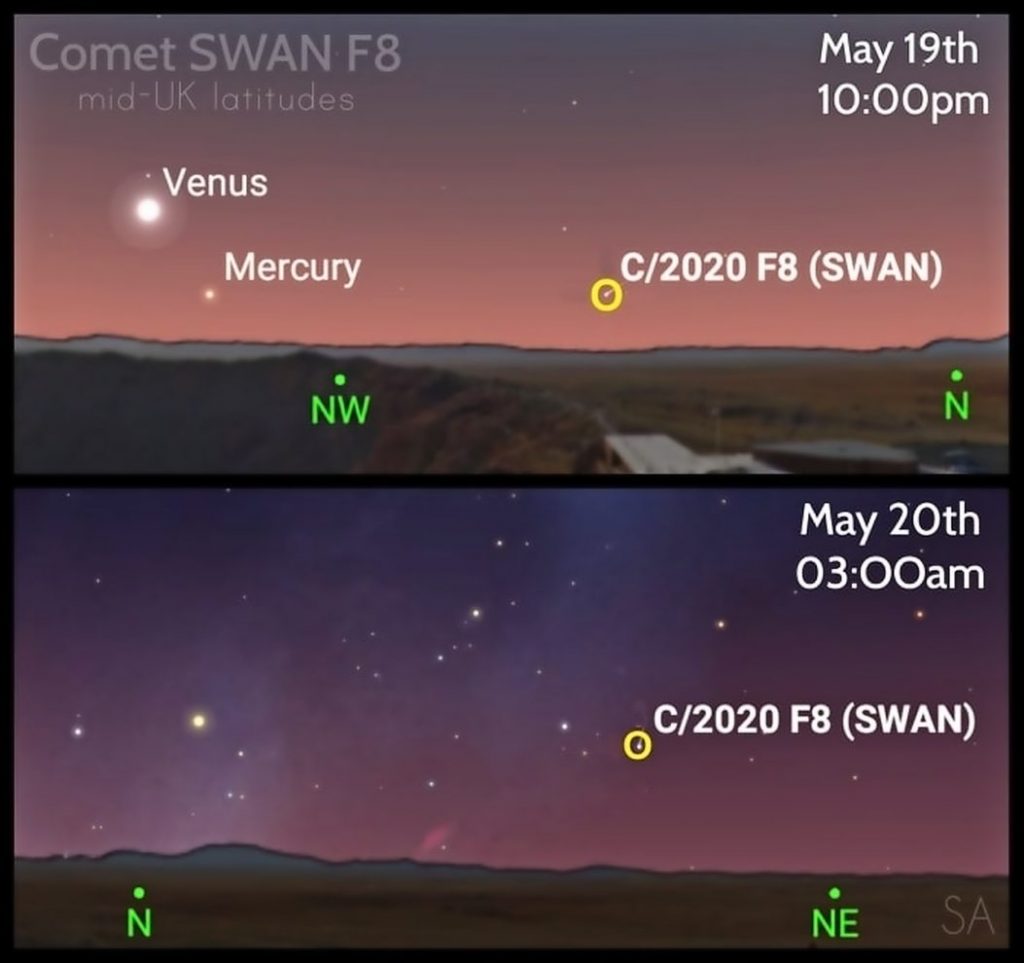 After that? Well, the comet will begin to arc over towards Capella. That is when most people will probably see it. 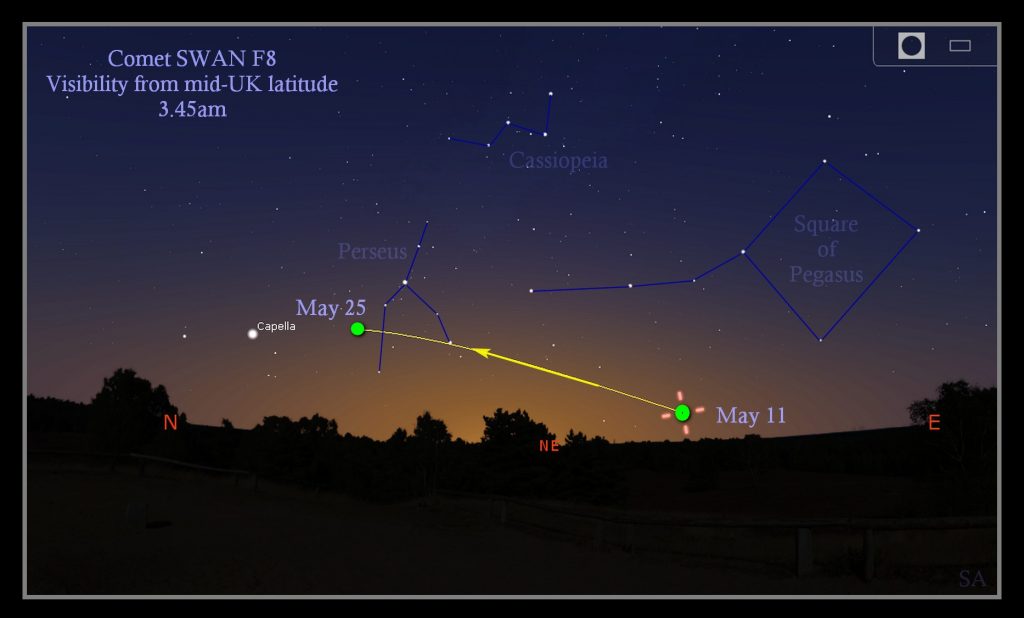 But what will it look like? I personally think we can forget seeing a prominent naked eye comet, although I would love to be proved wrong. SWAN may yet become a nice sight through binoculars and small telescopes, especially if the dust tail continues to develop. Fingers crossed! But it’s very possible that unless it has an outburst Comet SWAN is going to be another promised-much-but-delivered-little comet, and we’ll have to think of it as another one that got away.

But… there’s a chance that another comet might put on a better show in July. More on that in a future update.