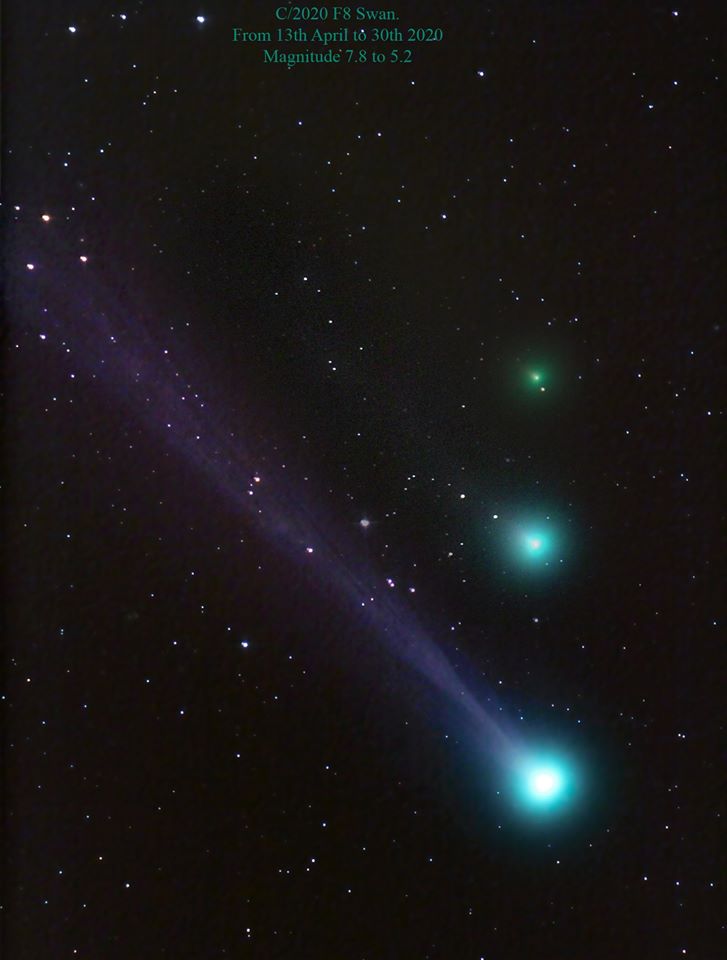 It’s been a long time since northern hemisphere amateur astronomers have been able to see a “good” comet in the sky, i.e. one that’s clearly visible to the naked eye. The last one was probably Comet Hale-Bopp back in the late 1990s.  There have been plenty of fainter ones since then, comets that were visible clearly enough through telescopes and binoculars and were bright enough to be captured on long exposure photos taken by DSLRs. We’ve also had a few near misses in recent years. Comet ISON and more recently Comet ATLAS promised a lot; when their numbers were originally crunched they looked like they might get bright but ultimately they let us down by falling to pieces like a badly-prepared inventor on Dragon’s Den. But maybe, just maybe our run of bad luck and frustration might be about to change…

Southern hemisphere observers are currently enjoying seeing a comet called Comet C/2020 F8 (SWAN (which I’ll just call “Comet SWAN” from now on) in their sky. It’s just about naked eye brightness, with a tail several degrees long that’s showing up nicely on long exposure photographs taken with cameras tracking the sky, and photos taken through telescopes are showing wonderful detail in that tail, with swirls and eddies of material flowing down it like the different strands of a stunt kite’s tail.

Frustratingly, Comet SWAN is not currently visible from up the northern hemisphere, but it’s on its way, and in less than a month will be in the northern sky. How bright will it be then? We don’t know. How long will its tail be? We’ve no idea! We’ll just have to wait and see. And there’s no guarantee it will be anything special. But assuming it doesn’t “do an ATLAS” and shatter, it will at least be interesting, and northern amateur astronomers are looking forward to being able to finally see what all the fuss is about for themselves.

But it’s very important to be realistic and honest here. It won’t be long until tabloids and websites start hyping-up Comet SWAN, using terms like “blazing”, “spectacular” and the like. And although there’s always an outside chance that it might surprise us all by being brighter and more obvious to the eye than calculations suggest, it’s very important to note that no matter how bright it gets Comet SWAN will not get very high in the northern sky. It will remain a “horizon-hugger”, never climbing very high in altitude at all. We will only be able to see it low and in a bright summer sky too. So don’t expect another Hale-Bopp or Hyakutake here. Even if it does get brighter than magnitude 4 or 3 its light will be diffused by the bright sky, just like a galaxy or nebula. Obviously a long tail would be nice, we’ve waited a long time up here in the north for a comet with one of those, and if it does develop a long tail that might make it easier to see – we might even see the tail rising up from beyond the horizon before the head of the comet is visible in the northern sky – but that’s a long-shot. It’ll do what it does. For now all we can do is wait…

If you’re wondering where the comet is now, and when we might get our first glimpse of it, here are a couple of charts, drawn using the popular Sky Safari app for observers at UK latitudes. They show where the comet is for northern observers in relation to our horizon and familiar stars. 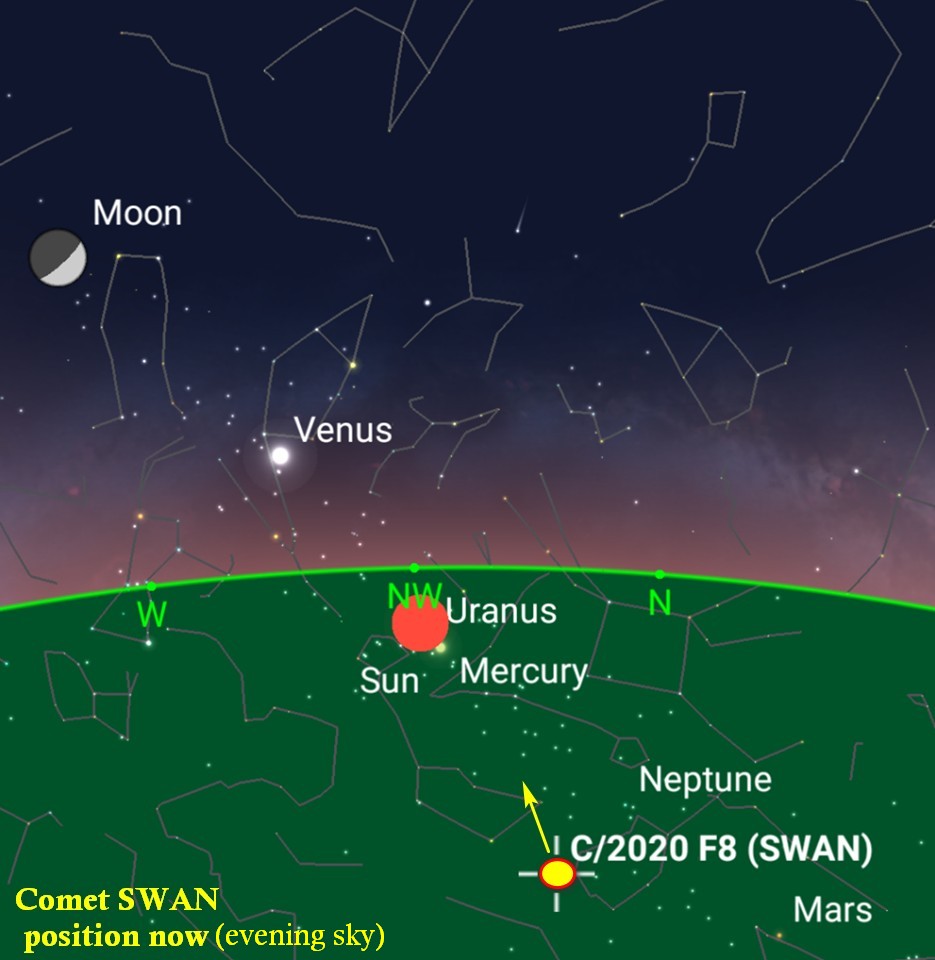 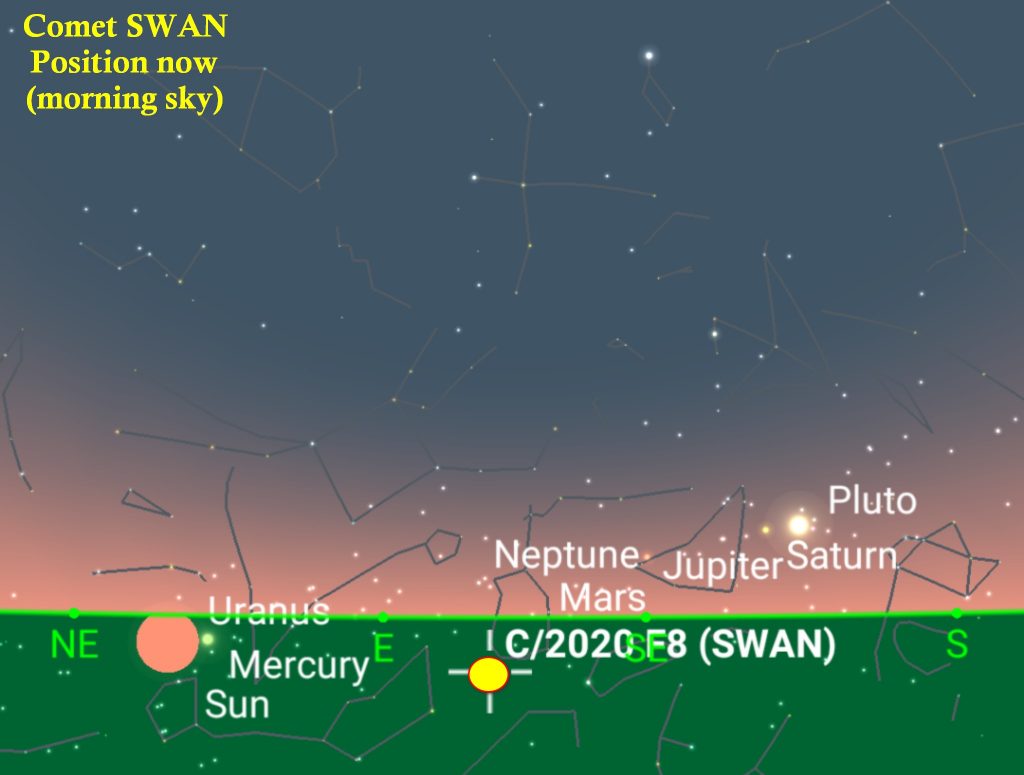 But what about when it does climb up into the northern sky? When might we get our first sighting of it? Well, again, it’s very important to remember that a) the comet’s visibility will be highly dependent on an observer’s location, and b) this comet will be dragging itself north into a bright sky, close to the Sun, so we can’t expect it to jump out at us. I personally their it’ll be May 15th before anyone in the UK (or at mid-northern latitudes) gets their first look at Comet SWAN, probably even a few days after that, but of course like many people I’ll be looking before then because I’m an impatient, optimistic insomniac.

Unless it falls apart, we will get our first look at Comet SWAN in the early morning sky sometime in mid-May, very low in the east before sunrise. 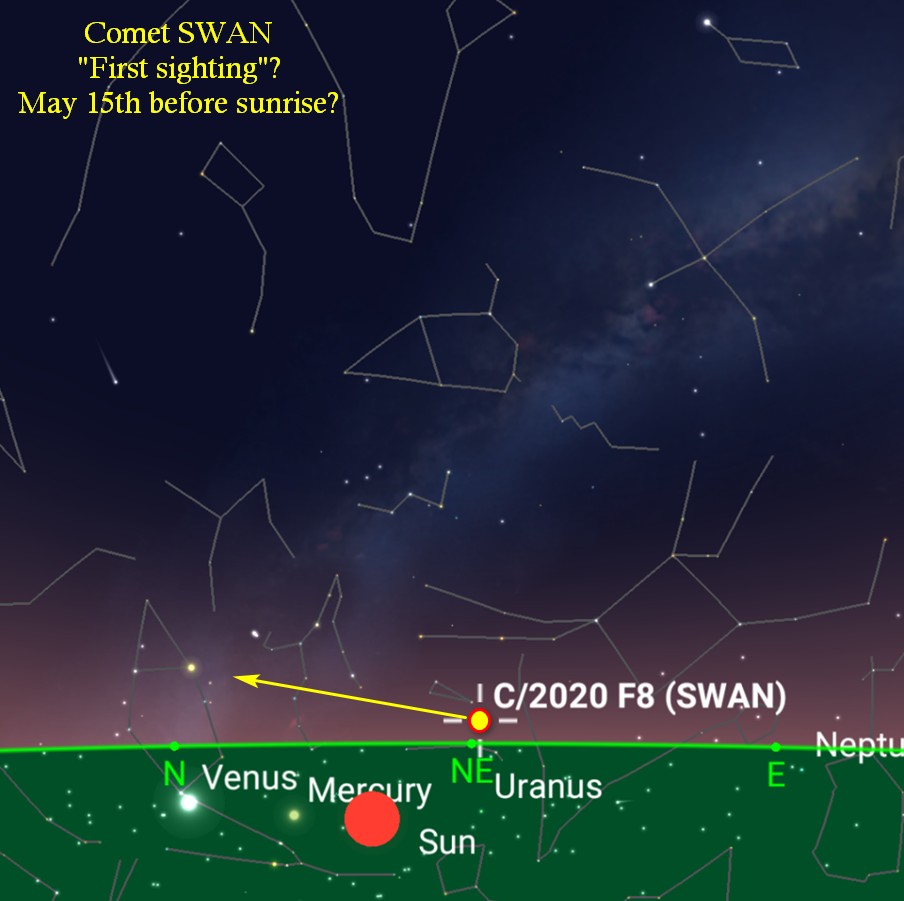 After that it will climb steadily higher, tracking beneath Triangulum en-route to the southern end of Perseus. From there it will arc over towards Auriga, passing the bright star Capella on the way during the first week of June. By the time it passes Capella it could be big and bright or already have faded considerably, we’ll just have to wait and see. But by then it will be visible both after sunset and before sunrise. Personally I’m crossing mu fingers that it will have a nice tail at that time, because by early June we will be into Noctilucent Cloud season, and the thought of being able to photograph a comet behind a lovely display of beautiful noctilucent clouds is very appealing…

Some more finder charts, all drawn for UK latitudes – and remember, your sky will be brighter than the sky rendered on these screenshots: 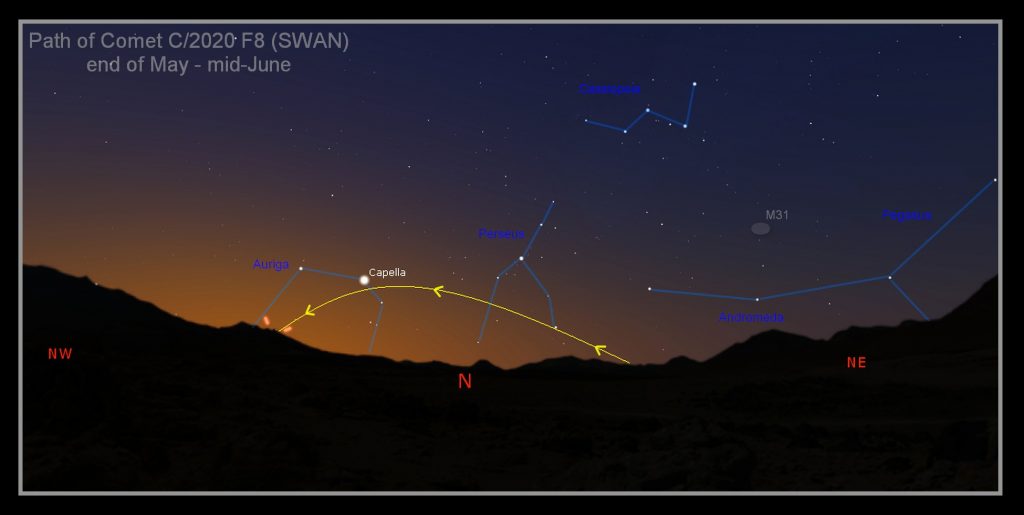 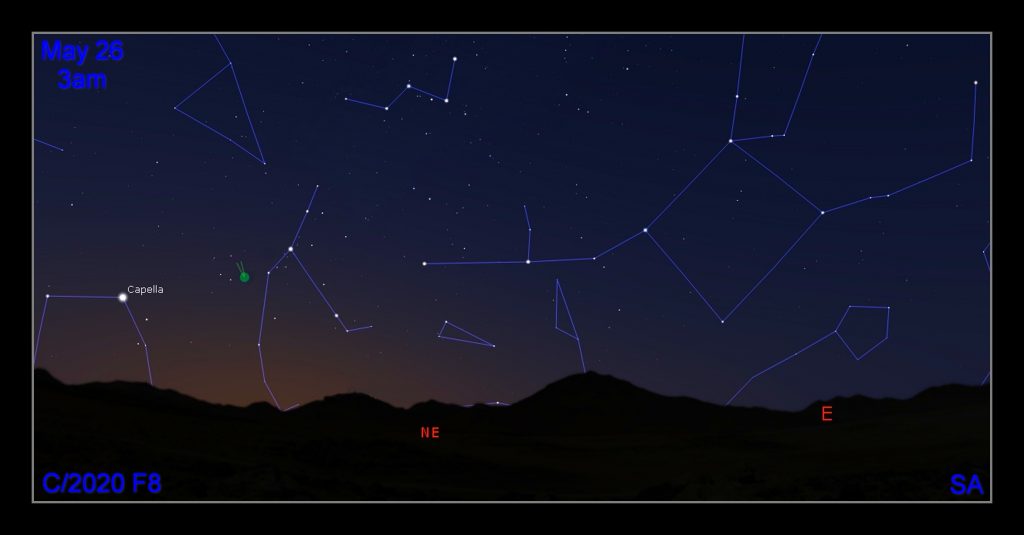 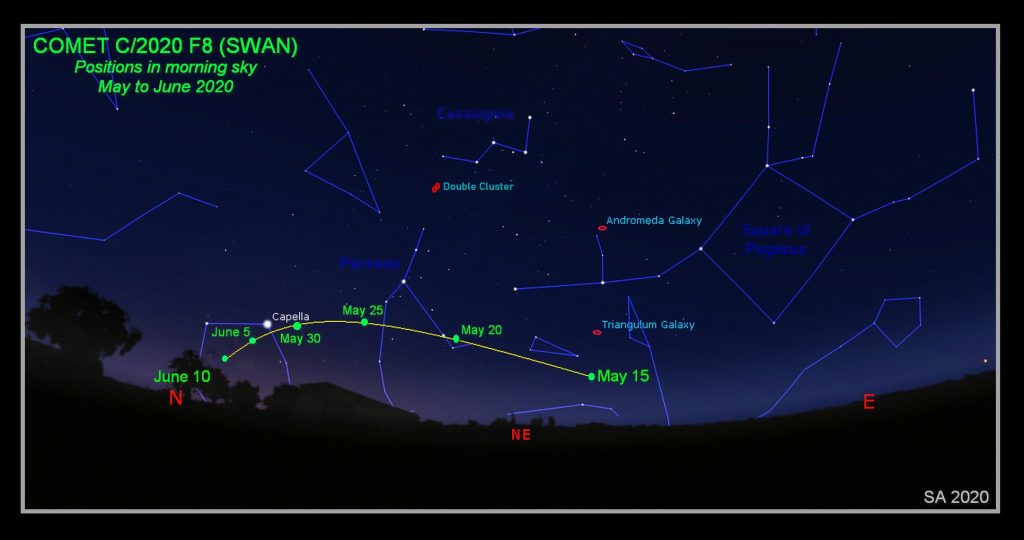 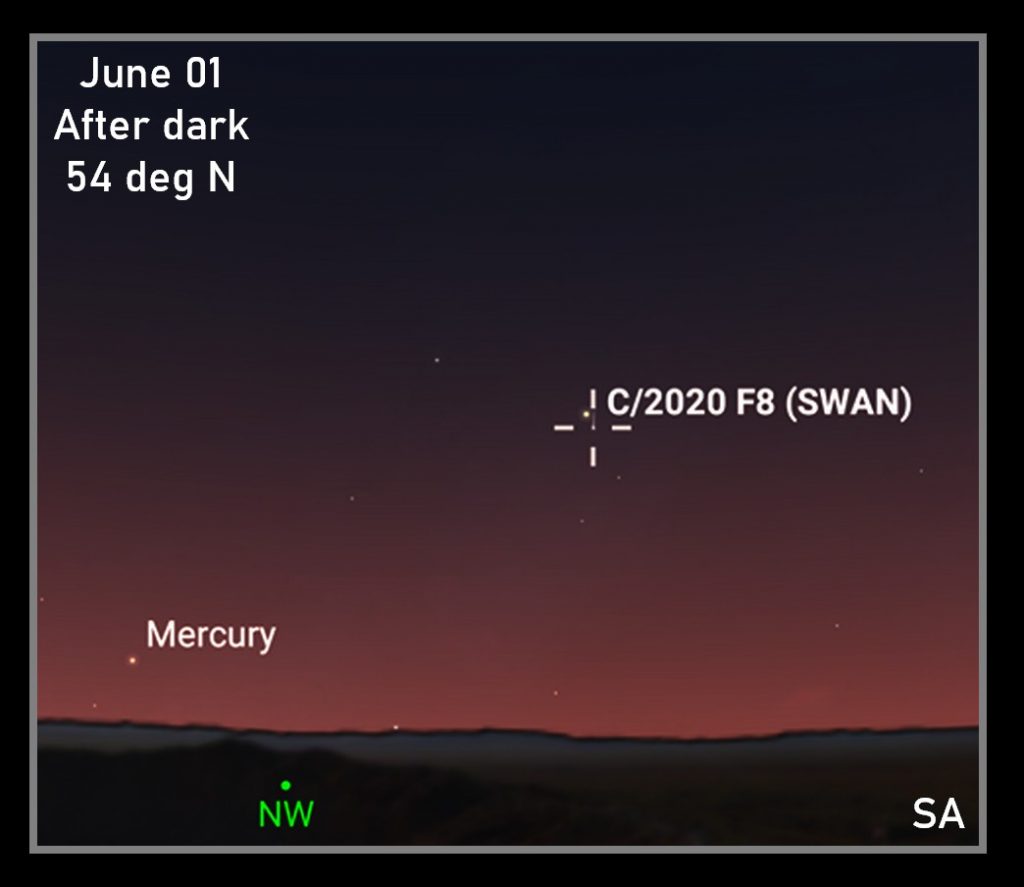 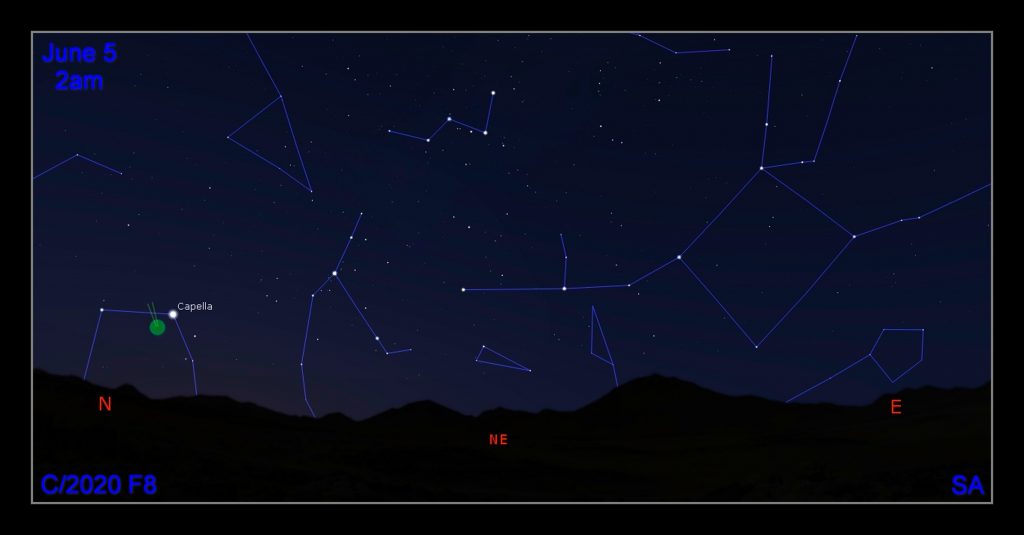 So, Comet SWAN is on its way, and now you have all the information you need to prepare for its arrival. But please don’t believe any of the hype you’re going to read about it soon. Remember the classic quote about comets: 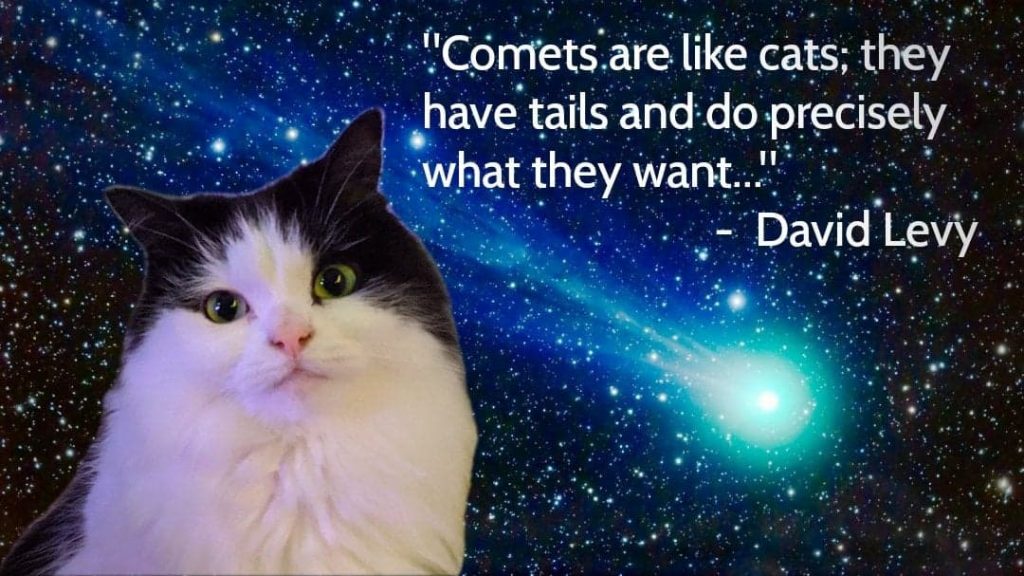