A spectacular fireball on 23 October may have dropped meteorites over the Cotswolds, according to experts. A search has so far been unsuccessful, but an appeal has been made for anyone in the area to keep their eyes open and to report any possible meteorites. 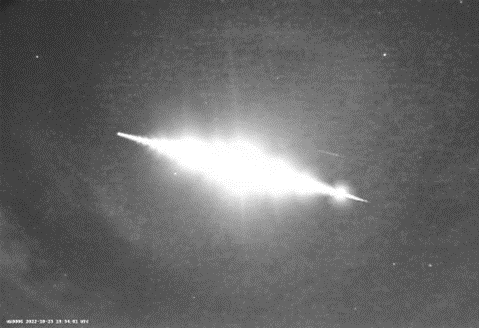 By extraordinary coincidence, the location of the suspected fall is less than 10 km from Winchcombe where a meteorite fell in February 2021. Analysis of more than a dozen photos from the UK Meteor Network suggest that it fell to the north-east of Cirencester in Gloucestershire.

An eyewitness to the fireball in Bristol said: ‘This was a wow moment in my life. It started as a bright white light moving very fast from roughly south to north and the turned into a tail of different colours but disappeared from view behind trees close to where I was standing in my back garden. It took between 2-3 seconds.’

Anyone finding a suspected meteorite is asked not to touch it with their bare hands to avoid contaminating the sample.