It may be the butt of jokes, but right now is a great time to look for the planet Uranus as it’s well-placed in the sky. But although the seventh planet from the Sun is four times the diameter of Earth and is just visible to the naked eye under good conditions, it looks like just another faint star so it takes some finding. Here’s our quick guide to spotting it in autumn 2022.

Where to look for Uranus
Uranus currently lies midway between Mars and Jupiter in the sky, which are the two brightest objects apart from the Moon in the night sky right now. But because of its faintness you’ll need to know exactly where to look. All you’ll need is binoculars, unless you have one of those Go To telescopes which will find it for you. Even with a telescope it’s not obvious that it is a planet at first glance.

The best time to look is after 9 pm (or after 8 pm once the clocks have gone back on Sunday 30 October) as it will be quite high up by then. Fortunately there are some easily spotted stars near by that will help you to home in on Uranus. Start by finding the Pleiades star cluster, which stands out as a little group of faint stars that catch the eye even though none is particularly bright. You might know them as the Seven Sisters. Take a look at them with your binoculars and you’ll see that there are many more than seven – a gorgeous sight even in a suburban sky.

From there it gets a bit more tricky. Look to the right of the Pleiades for a group of four faintish stars as shown on the map below, then keep going. Uranus is another faint star just beyond them. That’s it – you’ve found it! With binoculars it doesn’t really different, but for one thing. If you look on another night, you’ll find that it has moved slightly to the right compared with the nearby stars. It’s not surprising that no-one ever spotted throughout history that this one object moved slowly through the sky and is in fact another planet. It was an amateur astronomer, William Herschel, observing with his home-made telescope from his back garden in Bath in 1781, who noticed that it appeared to have a small disc rather than being a point of light. His discovery made him the most famous astronomer in the world in his day. He died 200 years ago this year and there have been celebrations of his life and discoveries both in Bath and in Slough where he eventually set up what was then the world’s largest telescope.

On the map we have shown how Uranus moves over the weeks. The planet will be at its closest to Earth for the year on 9 November, although you won’t notice any obvious difference in brightness or size from one week to the next. It is currently at magnitude 5.6 and its disc is 3.75 arcseconds across.

See for yourself how easy it is to find Uranus. Here’s a three-minute video recorded under the stars which takes you through the steps described above.

Through a telescope you’ll need a magnification of around 50 to see the disc at all well. SPA member Martin Lewis made a superb photo of the planet last January using his 444 mm telescope, as shown below. You won’t see this level of detail with a small telescope but take a look anyway. The bluish colour can be seen even with a small instrument. Oh, by the way, most astronomers pronounce the name ‘You-ran-us’. Sounds nicer. 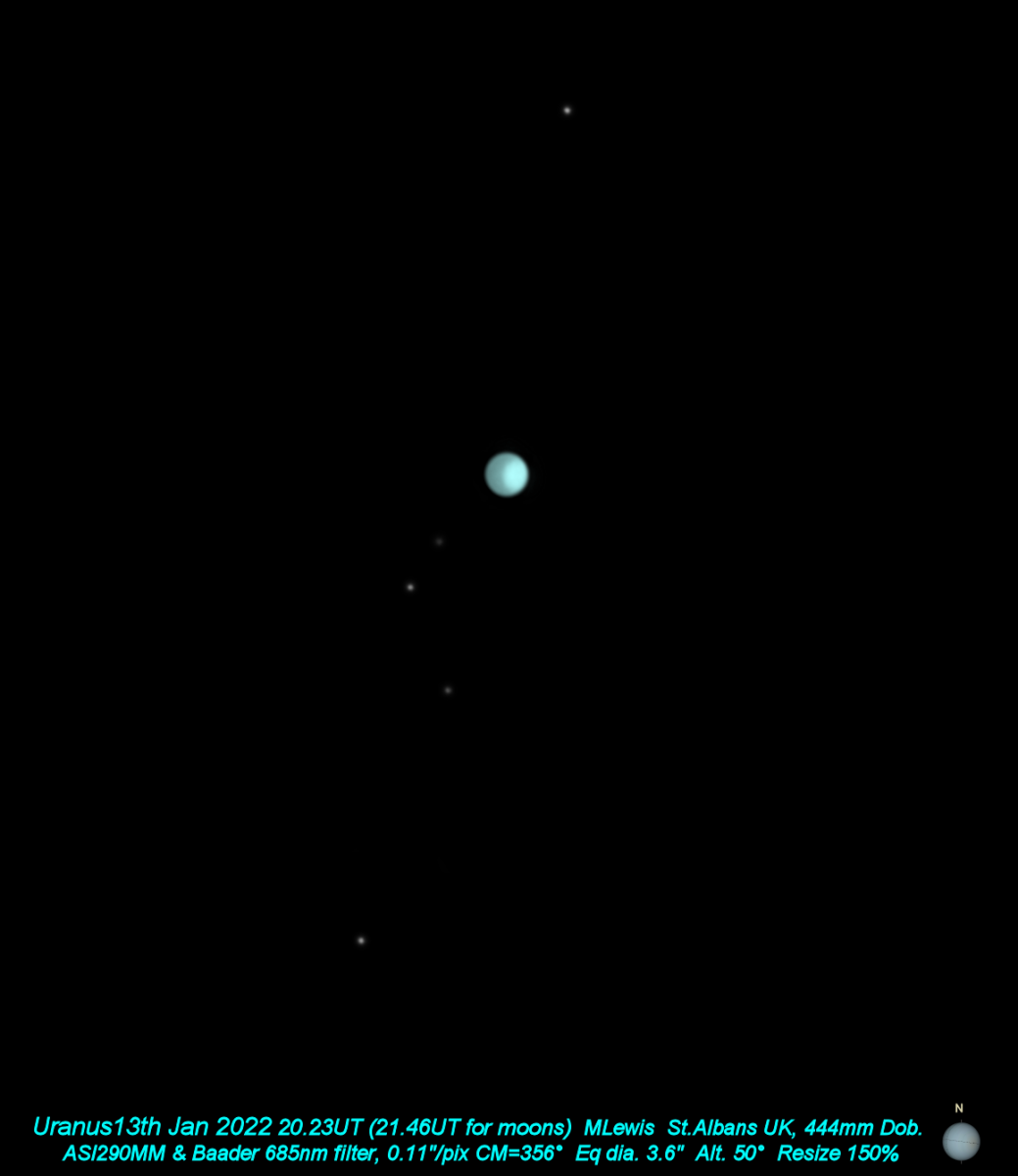