There’s a comet around, and for once it is high in the sky and visible all evening. But the downside is that it’s quite faint and small, so don’t expect to spot it from your suburban back garden using binoculars. In fact it is something of a challenge visually even from country sites, and you need a fairly large telescope and good skies to be sure of spotting it. And it will get somewhat brighter over the next few months, although it will never be a spectacular sight. Predictions suggest that it will not get brighter than eighth magnitude, which is well below naked-eye visibility.

The comet is called 2017 T2 PanSTARRS. If you think the name sounds familiar it’s because there are many comets bearing the name of PanSTARRS, which is the name of a survey telescope in Hawaii, designed to detect new objects such as comets and asteroids. So you do need to make it clear which PanSTARRS comet you are talking about. This one was discovered in October 2017 when it was between the orbits of Jupiter and Saturn, and it has been making its way towards the Sun ever since. It reaches its closest point to the Sun (known as perihelion) in early May, although even then it will not be much brighter than it is now.

The photo below was taken using a CCD camera and shows that the comet has a small tail. This will develop somewhat as the comet approaches perihelion. 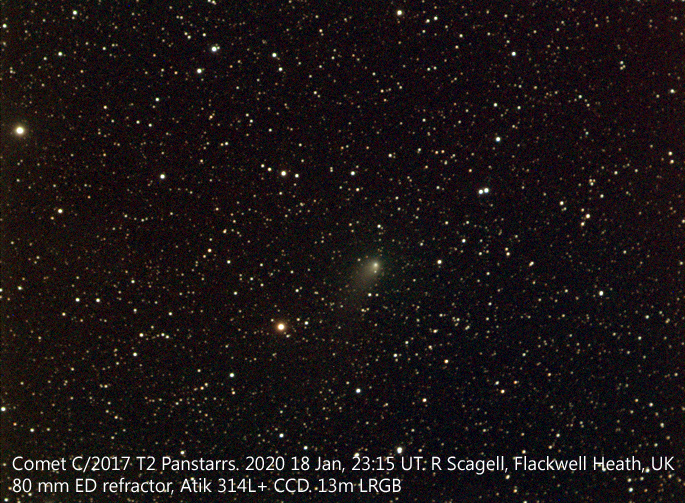 The chart below shows its track through the sky over the next few months, and below that a more detailed chart down to ninth magnitude. Although it passes through well-known parts of the sky such as Perseus and Cassiopeia, you will need to know the sky fairly well, or have a GoTo telescope, to be able to locate it, but to dedicated amateur astronomers it will be worth a look. Bear in mind that the comet is still very small in the sky, so you will need a fairly high magnification to find it. Also note that the quoted magnitudes on the charts are for the total brightness, and in practice it will appear considerably fainter than stars of the same magnitude. In the photo, the close pair of brightish stars between the comet and the top right corner are about magnitude 10.

SPA Forum member Nigel Joslin in Galloway, Scotland, viewed the comet using a 350-mm (14-inch) reflector on 15 January and reported that ‘The coma appeared larger and non-circular, and a bright centre was clearly visible even at 66x. I increased magnification to 110x and discerned a fanning out either side of the coma of about 45 degrees, two tails, ion and gas? At this magnification, I was also getting hints of fragmentation at the centre; increasing the magnification to 200x showed two bright condensations, a sight confirmed at still higher magnifications. At last, this comet is a rewarding sight.’

Those with suitable photographic equipment will be able to image the comet, but at the moment its small size will make it a difficult object for DSLR cameras and telephoto lenses. If you take any photographs or make any observations of the comet, please send them to the Comet Section Director, Stuart Atkinson.