October’s Orionid shooting stars could put on a good display this year, visible from all parts of the UK, although moonlight will cause problems during the early part of the peak of activity. 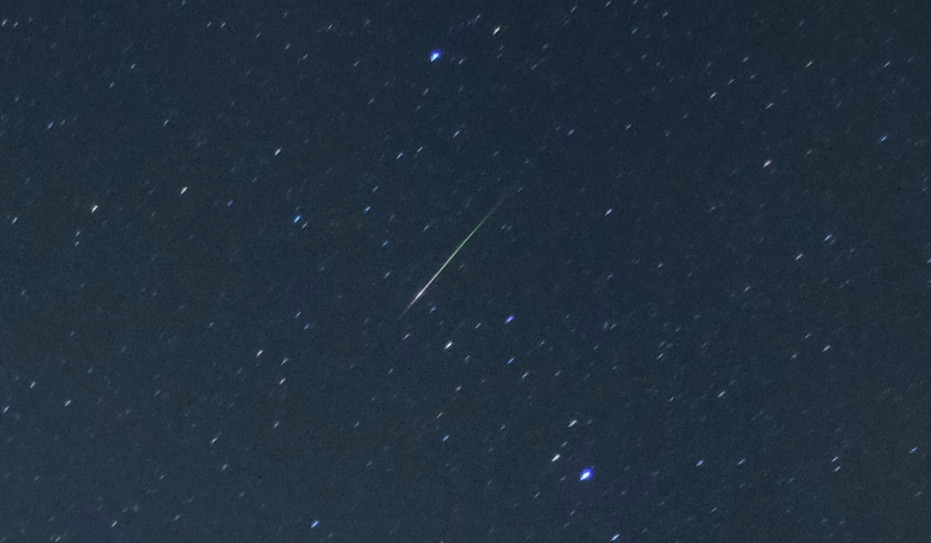 An Orionid meteor in Gemini photographed on the early morning of 22 October 2017 by Paul Sutherland from Walmer, Kent

The Orionids appear in good numbers between 20 and 23 October, and official rates are given as 20–25 an hour. But that’s the number that could be seen under ideal conditions, which never apply in the UK, so actual rates are likely to be somewhat lower. In practice you might see one every ten minutes or so on average, if you are a good, dark location and can see all the sky with clear conditions. And that applies in the early morning hours, so be patient!

These meteors appear to come from the direction of Orion, which rises in the east at about 10 pm BST, so any meteors you see before that time won’t be Orionids. Once the radiant (the source point) rises, numbers will increase throughout the early hours. This year, the Moon is around last quarter, and on the 21st is very close to the radiant itself. But it rises later on subsequent nights, so there are ‘dark windows of opportunity’ on Tuesday 22nd and Wednesday 23rd. And by the 23rd, the Moon is only 33% illuminated so will not brighten the sky too much and the brighter meteors will be easily spotted.

Orionid meteors are typically swift-moving, with long and persistent trains. While there is no particular direction where they will appear, it’s best to avoid looking directly at or near Orion itself, as the meteors will appear foreshortened in that direction and won’t be as easy to spot. Looking due south will also keep the rising Moon out of your main field of vision. The diagram on the right shows the position of the radiant and how it moves against the starry background during the shower appearance.

Get more information on the Orionids and how to observe them at the SPA Meteor Section site. If you want to contribute, please count the numbers of Orionid and other meteors that you see in an exact period, and send them to the Meteor Section director.

The Orionid meteors arive from dust left by Halley’s Comet. Does the appearance of these meteors mean that we might see Halley’s Comet as well? Sadly, no. What happens is that the dust from the comet has spread all along the comet’s orbit around the Solar System. Halley’s Comet is now almost as far away from Earth as it can get, beyond the orbit of Neptune. It has also spread over a wider area than the comet’s orbit itself, which is why we see these particles coming through our atmosphere even though Halley’s Comet itself can’t come very close to the Earth.

Imagine the comet to be an aerobatic plane doing loops and giving out a smoke trail. You could see the whole loop as a large trail in the sky, wherever the plane happens to be, and spreading out all the time.

Every October, Earth passes through the edge of this trail, and ploughs through the particles, which dash into our atmosphere and burn up, creating the brief flash of light we call a meteor or shooting star.