The famous variable star Mira has brightened in recent weeks and is now visible with binoculars or even the naked eye from many light-polluted locations.This star, also known as Omicron Ceti, was the first variable star to be identified as such, as long ago as 1596, and its behaviour earned it the nickname of Mira, meaning ‘Wonderful’. For much of the time it is invisible to the naked eye, becoming as faint as magnitude 9, but every 11 months it fairly quickly brightens and spends around 12 weeks brighter than magnitude 5.

In some years this brightening coincides with Mira being too close to the Sun for observation. However, this year it is beginning just as Mira remains in the night sky throughout its predicted bright stages, making it readily observable.

On 26 September Trevor Law estimated the brightness of Mira to be magnitude 3.6, in line with the photograph at the top of this story, taken on 27 September by Robin Scagell. Other observations show that the star brightened by three magnitudes in two weeks during September.

Normally the rate of increase slows down after this rapid brightening. However, with a month to go before predicted maximum, it will be worth estimating its brightness frequently. In some years, such as in 2007, it has reached magnitude 2, rivalling Diphda, the brightest star in Cetus.

This area of sky rises in the late evening. You’ll need to wait until after 10 pm to get a good view of Mira and nearby stars with which to compare its magnitude. The constellation of Aries, which is due east at about 10 pm, is a good place to start, as shown in the photograph below.

To find out more about Mira, look at the Variable Star Section’s page about the star, which also has a map showing suitable stars with which to compare its brightness. The VSS help files will also give useful tips on making your own observations. If you do make an estimate, please send it to the Variable Star Section director, Matthew Barratt, as described on the section pages.

Another well-known star, R Coronae Borealis, has just undergone a fade in brightness. This star has roughly the opposite behaviour from Mira, in that it can suddenly fade by many magnitudes. However, unlike Mira even at its brightest it is only magnitude 6, so requiring binoculars to see it in most cases. And its fades are not regular, but are unpredictable. From 2007 to 2014 it was very faint, but in the past year it has remained at about magnitude 6.1, as shown by the BAA light curve below.

Tracie Heywood comments: ‘R CrB is at that tricky stage when it might return to maximum within a week … or fade dramatically … or have a smaller fade that stays within binocular visibility.’ You can follow this star for yourself, as it is still visible in the early evening sky.

Use the SPA comparison chart below to make your own estimates of the brightness, and as with Mira, please send your results to the VSS director, Matthew Barratt. 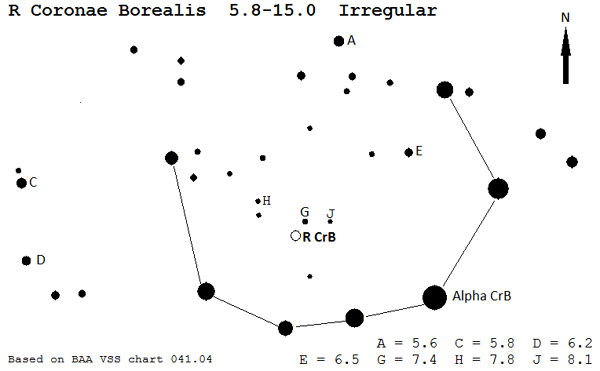